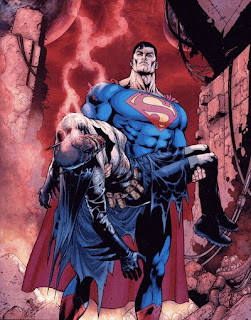 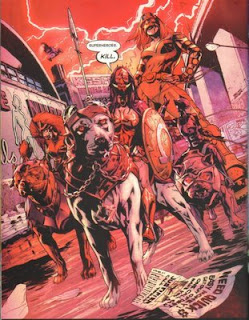 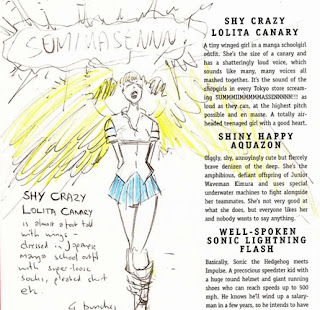 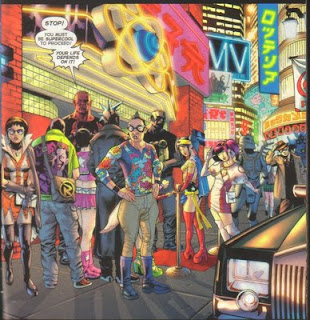 Issue 6 out of 7 arrived yesterday. This is the first issue that quite a bit of the artwork was not by JG Jones. For all intents, the last page is exactly as you see it, because for the next few years Bruce Wayne will not be Batman (Wayne will be back, but its confusing enough talking comics and keeping you interested w/o explaining everything, though I'll say, its not a cop-out or a sales ploy, there's a good reason why Wayne will not be around until maybe 2011). But check the final page (by Dough Mahnke) of #6 compared to JG Jones's final page in #3 (Wonder Woman, Catwoman, and Batwoman with a ball gag in her mouth), one can only imagine how Jones would have depicted the former. Something I forgot to mention in earlier posts, Grant Morrison created this wonderful Japanese superhero team led by Most Excellent Super-Bat and they are called the Super Young Team. Here is an entry from the sketchbook as well as from FC#2. I'm going to miss JG Jones's work on FC#7. Just compare those first two images, man. That second image is what my dreams look like.
Posted by Wayne Allen Sallee at 1/15/2009 10:53:00 PM

Sometimes I miss the days of owning a comic book shop and reading everything for free.

Some nightmare: a posse of hot super-heroines turned vicious killers riding big attack dogs. At least they look good doing it. Actually, that's one of my problems with the basic premise of FC-- what's different about this attack that made these strong individualists surrender so easily to the anti-life equation? Fear? Despair? Hell, WW snapped Maxwell Lord's neck to break his hold on the big blue schoolboy, and deliberately blinded herself once in a gambit to stop Medusa, which should have permanently installed her in the you-can't-break me pantheon. I don't mind comics throwing characterization away for the sake of a throwaway story (What If Wonder Woman went rogue? What if Jeannie had a brunette twin?) but when DC markets this as a MAJOR EVENT... it's just fanboy shock value, like Phillip Marlowe in a leisure suit, Sherlock Holmes quitting the pipe, or George Bush being right about something.

Wow, I'm out of the loop. Wayne won't be batman? Dude.

"That second image is what my dreams look like."

Really? I thought your dreams looked more like this!