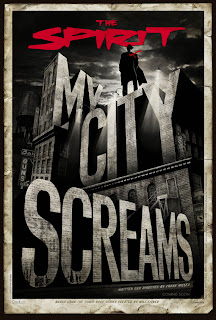 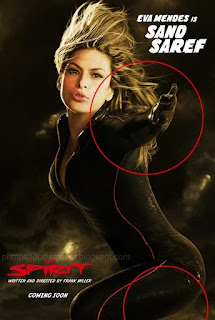 I had initially planned to have a YouTube someone made in which they drive the length of Lake Shore Drive on a rainy night, and it would be perfect scenery for Danny Colt (with Jonny Algiers riding shotgun). Don't know if the film will be any good, seeing as how Frank Miller wrote the script. But the character Will Eisner created in the 40s was very much one of the most overlooked characters until the last few years. The guy has as many babes as James Bond (or Jonny Algiers). I was hoping to see P'Gell in the film, if only to see how the hell her name is pronounced, but Eva Mendes is the perfect choice for Sand Serif. I'll have to admit that I have a crush on Eva Mendes, I do. Not enough to watch GHOST RIDER all the way through, but close. I'm just waiting on the film, having no expectations so as to not be disappointed either way. I do wish they had filmed in Chicago, though.
Posted by Wayne Allen Sallee at 11/29/2008 12:03:00 AM

'Not enough to watch Ghost Rider all the way through'-- hot coffee hurts when you spit it out your nose!

the previews looked interesting but I'm afraid I don't have any experience of the character.

Somehow, Frank Miller just doesn't seem to me to be the guy to do The Spirit even with some gratuitous Scarlett "I'd-Walk-Five-Miles-Through-The-Driving-Snow-To-Stand-In-Her-Garbage" Johansson.

The previews look awfully Sin City-ish, which is kinda, sorta okay, but didn't he already make that movie?

It's a shame we can't set up some sort of chrono-synclastic infundibulum and bring back a young James Garner--he'd be the perfect Denny Colt!

That's what I want for Christmas...someone to bring back (or bring me) a young James Garner. :-x

I'm not a big fan of Will Eisner's (to put it mildly). Also, I really didn't care for SIN CITY, and as this looks like more of the same, I'll be avoiding it.

I reeeeeeeeeeeeeally had a major league problem with Miller's thinking when, in one of THE SPIRIT promos he says: "She is my mother. She is my lover."

Is "The Spirit" based on a novel or comic books or what? I must admit I'd never heard of it. The film looks interesting, though.

I'm not a fan of what Frank Miller has become, both as screenwriter and as comic book writer. Every male character "sounds" like Marv in SIN CITY (which actually were great graphic novels, a decade ago). I've replied to a few of you in regular email, its surprising how so few people know The Spirit. Call me crazy, I'm just pleased that Eva Mendes is Sand Serif, since it proves I could be a decent casting director. I'll admit I was off in thinking Danny DeVito could have been The Spirit's stunt double.