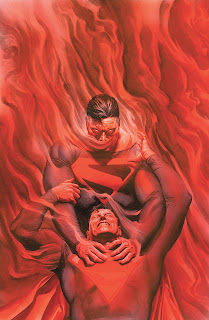 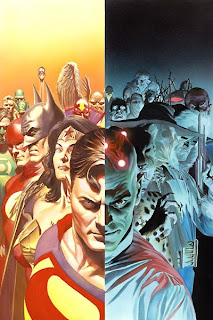 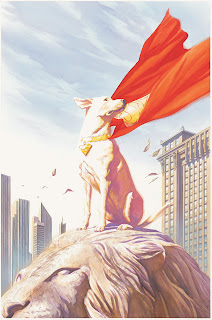 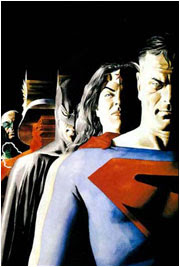 Maybe Steve does know comics, maybe his comment yesterday was in jest. In the orrery of worlds that make up the multiverse of DC Comics, Earth-22 is where the events of KINGDOM COME took place. The artwork above is by Alex Ross, a friend of mine. His father was a minister and appears a man representing, well, US in the four issue book that was published in 1996. It had high religious overtones, the main thrust of the book being that the older heroes have retired and the next generation just doesn't give a damn, they are either in gangs or hanging out in bars. Violence escalates, Superman and the others come out of retirement, and its pretty much all about Whose Will Be Done? The humans...or the superhumans. It was written in novel form by Elliot S. Maggin, a Superman scripter in the 70s and currently a minister in Vermont. The novelization adds more dimension to the spiritual aspects than the visuals you see in the comic. Alex is an incredible painter, working primarily in gouche, and he auctions off a huge amount of his original artwork to charity. I've mentioned in past posts that I have modeled for him, as he has a vast library of different head shots and poses, an example being chair cushions being car roofs for Captain America to leap over. I had a small appearance in KINGDOM COME as a United Nations delegate, and recently I was on the cover of JUSTICE, you can see me on the right with the gun and wacky sunglasses. He's done quite a few covers of late, concentrating on the Superman franchise, and I think this painting of Krypto, from the upcoming Superman#689, looks pretty much like my collie. But, if you read my comment to Steve, Earth-22 is gone, so maybe he can visit me on Earth-14, my usual hangout. For everyone else checking this entry, I'm having a relaxing early Monday morning stroll down memory lane.
Posted by Wayne Allen Sallee at 9/21/2008 11:34:00 PM

I did rather enjoy Kingdom Come, and yeah, pretty much anything Alex Ross does.

I just can't keep track of what number the various Earths are. Heck, I remember when they had themselves a big ol' Crisis to get back down to one earth and stop that nonsense.

Of course, like anything in comics, nothing last forever but the franchise...

Maybe Earth 22 lives on in the hearts and minds of the fans.

"..the older heroes have retired and the next generation just doesn't give a damn, they are either in gangs or hanging out in bars"...heh, art imitating life, or vice versa? :-\

Personally I'll always prefer "The Tick," who lives in "The City," in which virtually everyone's a superhero.

What was Earth-22? Was that us? The world in which all comic book heroes were just that...in comic books and nowhere else?