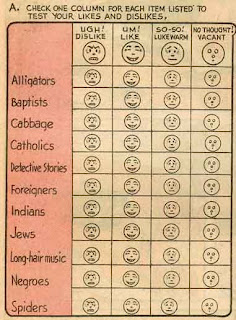 I'm adding this strange checklist thingie because I wouldn't be surprised that the bastards, i.e., the clinical psychologists who ruled my first thirteen years would have been doodling on such a card while they were watching my struggles. For three days a week, until May of 1972, I was in Room 18 at the Cook County Clinics, actually right next to the burn ward, which was pretty damned traumatic in itself. But on those three days I would learn to walk (when I was four), climb stairs, and did my best to use my right side. When I was older, I was put in a white room and timed while I performed dexterity experiments. Watched from behind one of those window/mirrors like you see on a cop show. They'd let the clock tick and watch me even after I cried from the pain. These memories come to mind because of a few articles I'll be writing for a book on psychology, similar to MacGill's. I'll be writing about the "Bobo doll experiment" where kids played with tinker toys as an adult hit an inflatable Bobo doll with a mallet, the same kids than being tested for aggression, and you can guess how. Then there's the "little Albert experiment," where a kid who was not yet 4 years old was kept on a table and tested for fear by such things as a white rat placed on him, then a sealskin coat draped over him, and at one point being startled by a lab assistant in a fake Santa mask with cotton balls glued to it. I might be doing an article (you kinda ask for them in order, and if no one else snags one, its yours)on Milligan. He's the bastard who had his test subjects decide how much voltage (though it was fake, and acted out by others) they would/could/did administer via the crank of a dial and a glance through a window at the fake victims. And these are examples, much like those of my early life, of why I despise clinical psychologists. I hope someone got an A+ off a paper they wrote about me...I remain, your chattel, Wayne
Posted by Wayne Allen Sallee at 8/28/2008 11:06:00 PM

Yeah! When *I* frighten small children in a Santa mask, I make sure there is no scientific value whatsoever!

In a way, we are all test subjects

The horror. :-( Right, I'm sure that they were working very diligently to help you...not. And now it's your job to write about it as you do, and expose it. Better late than never.

Back then the way psychology used to be (even wrecking the lives of the wealthy, a la Rosemarie Kennedy), it's not difficult to see why L.Ron Hubbub hated them (especially since they said he was nutzo). At least it's become more humane for the most part as of late.

John Watson was quite the asshole. He did the Little Albert experiment. Did you know I'm chair of the committee at Xavier that oversees all human research to make sure abuses don't occur?

btw, Milgram instead of Milligan.

Good comments by each of you. Capcom's a fan of LOST as I am and will understand that once they went from are the crash survivors in purgatory to the findings of the Dharma people doing psychological experiments in the late 1970s on the same Island, well that's when I knew I'd be watching the show through to the end. And I've told several people that if I'm dead before May of 2010to dig me the hell up and give me the dilly-o.

Charles: No, I wasn't aware that you were on that committee and I admire you even more now. Yea, its Milgram, not Milligan, but I was all fired up and was lucky I didn't type Mulligan or Culligan Man or Ronald McDonald.

Watson was an ass for using a kid at that young age, but the clinicians who put the older kids up to the Bobo doll, well, I can't imagine each of the kids not walking away from it without, say, at least one growing up into being a wife abuser or even a serial killer.

We worry about fighting robots. Its the colinical psychologists who have no emotion...

Yes, clinical psychologists and the crazed bastards who do all of the sex-change work are indeed sick and twisted individuals. Whenever they're busy, Joseph Mengele is watching from Hell and laughing his ass off.

Hemlockman: I think there's a Mengele wing at the Cook County Hospital.

Alligators & cabbage...really? That's so f*cking goofy!
I hear you on clinical psychologists...although perhaps through more experiences w/psychiatrists, myself. When I was 18 they wanted to give me shock "therapy." They just didn't want to admit that no pill would cure the experiences that left me with PSTD & various other, nasty, mental health issues. Fortunately my legal guardian at the time voted the electroshocks down!