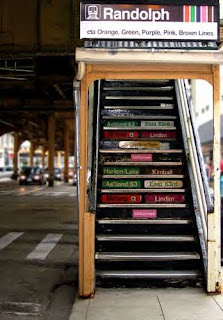 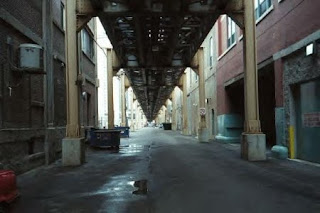 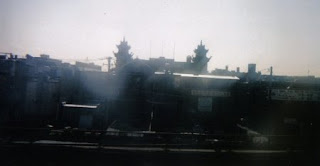 Back to Bubbly Creek tomorrow. Read my novella "Lover Doll" at the new place, MYSTIC CELT, after Mort Castle fund himself double-booked. Larry Santoro and his wife Tycelia were there, Larry reading a portion of his novel-in-progress, and one of his friends, a guy named Jim was there, someone I had met in times past. Larry and I have been reading together at TwilightTales almost as often as Martin & Lewis sang on bigger stages with a drunker audience. As one can see from the first photo, there are about seventy train lines that converge in the Loop. The Celt is right off the Southport Brown Line stop and I took that ton the Red Line stop at Belmont. Surprisingly, there were 325 (I learned later) high school kids from Dallas from a church group. If their shirts had been darker blue, you'd think there'd been a Cubs game as the train pulled in. I pitched in to help give directions when a drunken guy who asked three times "So, what's on the agenda?", which kept reminding me of Dan Rather getting mugged by two guys asking "What's the frequency, Kenneth?" I pointed the way to Moody Bible Institute from the Chicago/Franklin stop because, well, I just know where stuff is. I stay on the Red Line long after the rest of us Caucasians flee at Roosevelt. Deep in my anthology, CHICAGO NOIR, a woman next to me asked where I was getting off, perhaps concerned I was on the wrong train. I told her 87th and then we talked the rest of the ride, my eyes were tired from the TT reading and I didn't mind. Some guy got on at 35th Street, opposite Sox Park, in a gold shirt and what looked like baggy conductor pants, grabbed his crotch and sang high notes. The woman, Janet, told me about her job at Cub Foods. 87th came faster than expected, and the bus came even faster. I bought some Melatonin at the CVS (to help keep the dream demons away, so far its been effective), that's where the bus route ends, and then I kept walking the half mile home, under a near full moon. Sirius close by. Not a lot of traffic then, one of those weird gaps between job shifts or bars letting out, so I just hear my footsteps and see my shadow changing shape. Back to the creek tomorrow, promise...Wayne
Posted by Wayne Allen Sallee at 7/14/2008 11:43:00 PM

I figure I've missed out on a lot of potential weird stories from having hardly ever ridden a subway or an el. I rode in New York a couple of times with Lana, but it's not something I grew up with. Lots of interesting characters I imagine, though.

If I ever try my hand at urban fantasy, don't be surprised if the hero resembles you!

Nice shots of the el. We have light rail in Charlotte, now. The locals whined and moaned about it. Ridership is off the scales. We need more.

I have an e-mail in Limbo -- my e-mail is going nuts, but I wanted to mention
that Stearns(?) Quarry must have been at least partially filled in -- that mutha'
was deep! Mike Schwarz wasn't exaggerating when he estimated about 300 feet.
I drove around on Archer Sunday evening (coming back from me mum's) -- the
streets look the same but you can't see past the fences much anymore. What I'll
have to do next is get on the Stevenson to Ryan feeder ramp -- that has the
elevation to get a peek over in that direction. Anyone wanna go to Indiana?

I loved the photo of the R. V. Kunka Drug Store -- with the Manhattan typeface.
It is the great prototype for the corner drug store, at least on the outside now.
Something tells me that going inside would be a little disappointing.

One of my great drug store haunts of yore still exists -- at 63rd and Central. It
used to be a Rexall. The building has a great terra cotta facade -- which may
have been one of the touches that has so far spared it from the wrecking ball.
So far. Even forever don't last so long no more.

Standard Federal Savings in Brighton Park across from used to be the Archer
Avenue Big Store -- now Zemsky's-- used to be a great building -- inside it
looked like the cathedral of money. In the late '60s they "modernized" it and
managed to make it all look tacky. Alas. Saint Mammon. My dad and I used to
stop at Standard Federal and then stop at the fish market a block or two east of
there. That fish market had the best bagels ever made in the universe. I may
mourn the loss of all these buildings of my youth, but eve more I mourn the
loss of those bagels.

KRZZZP! Back to the present.