Behind The Skins Of Buildings 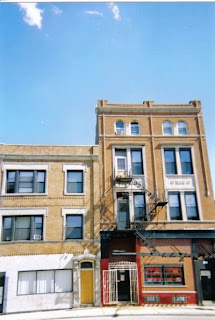 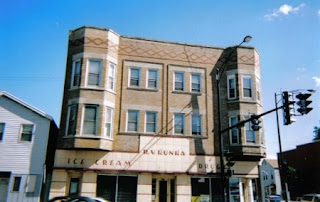 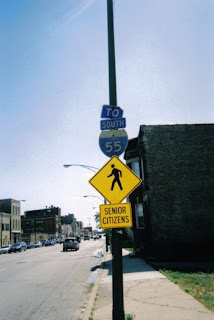 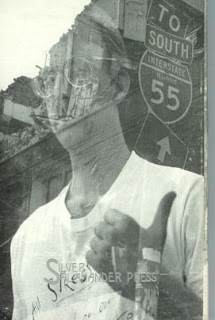 I took the first photo because of the number on the second floor, many two- and three-flats on Archer have their street address in the granite above doorways or on walls. This part of Archer has many side streets that are longer than Hoey, but not by much, and none run intermittently across the city as certain other streets that intersect Archer will, i.e., Avers and Ridgeway. Pitney Court, Salt Street (no sign, dammit!), some streets act as markers, Quinn Street has a vacant lot where the Quinn Street Inn stood, Arch Street has the vacant lot where St. Bridget's used to be. Broad Street, Lock Street, the bus would speed by them in an eye blink. The Doghouse is gone, a tavern with cut out dogs on the angled roof. The place that sold Filbert's root beer is still there, only not it has a sign on the metal door that reads Southern Sails. You can see Kunka's Drugs in the movie BACKDRAFT, which was filmed here during the autumn of 1993. Further up was the massive Archer Avenue Big Store, which became a Zemsky's and is now a supermercado. Kunka's seemed to be closed, and I had no one nearby to ask. This style of architecture could be seen in many buildings now gone, ice cream parlors and small restaurants, the old Martin Senour paint company (on Senour Street), and a few small shops across that street (35th) in a huge building that once housed the Peterson Bowling Alley, which was on the SECOND floor. To an extent, even the long gone Brighton Theater had brick structure like Kunka's. The vacant lot by the I-55 sign was where the church had been, now there is a huge billboard attached to the next building over for a strip club in Indiana. That sign is the same one from the happy accident double exposure from the back cover of WITH WOUNDS STILL WET, the photo by HE Fassl. Times past, man. Times past.
Posted by Wayne Allen Sallee at 7/13/2008 09:42:00 PM

You know the Old Archer Avenue Big Store had been a family staple until it became a Zymskey's cut rate emporium. The old Brighton Theater was the last bastion of sticky floors and bad popcorn for miles. But you missed two hugely important buildings in my 'hood. Well, three actually. The first is the old Standard Federal Bank Building. It was taken over by TCF about six years ago. It was THE place to meet old Polskas and their widow's pensions if you were in the market for an old lady with money. The second one is on the same side as the Big Store building. It was an original Walgreen's, one of the first in Chicago. The damn thing even had a lunch counter and a down stairs, that was also a fallout shelter. It's now called La Plama market and smells of old feet if you go in there. But the outside is very Art Deco if you can see past the tacky signage. The third and most important is on the inside of the triple corner at Archer and Sacramento and 42nd. it is the oldest working firehouse in Chicago. it was featured in Backdraft also funnily enough. built before the turn of the last century when Brighton Park was a half day ride from the city. It has a tricky historical rating, the City can not sell it to developer, it has to remain a firehouse or a museum and can't be torn down. Thanks to fast Eddie Burke that is.

Sorry I missed your adventure- it sounds like it was fun.

I love this Lone Urban Geographer thing you're doing. I wish I'd thought to make a similar chronicle of Minneapolis/St. Paul before I left. My last visit back, every time I asked about one of my old haunts, I was told, "It no longer exists."

I was starting to feel like the damn Flying Dutchman or something...