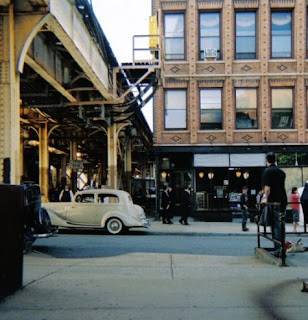 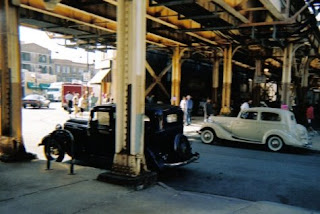 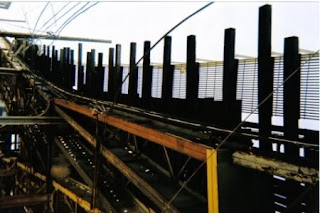 An hour into my day, I watched a guy on methadone arguing with a heroin addict over a crate to beg from in front of the Old Navy downtown. There's a lot more after that, and I might just write a story to read next Monday at the Mystic Celt, the new place for the Twilight Tales readings. Photos on the next roll, the ones just developed are from the Dillinger shoot. I only took a few photos; spent more time talking cop with a guy whose dad, also a cop, was an extra in the BLUES BROTHERS film way back in August of 1979. The scene is underneath the Red Line, crossing Clark Street towards Addison. At times, I'll sit at that el stop, watching part of the Cubs game, seeing only a sliver of right and center field, but I don't care because the background noise helps me write in my commonplace book. That shot underneath the el has some cool stores just out of site. There's BOOKWORKS, and no more need be said. Years back, I bought a pb of Nelson Algren's NEVER COME MORNING. Past that is STRANGE CARGO, where you can buy Doc Marten boots, Starsky & Hutch t-shirts, and postcards of Abe Vigoda, bobble heads of everything iconic, packs of trading cards with stale bubble gum of HAPPY DAYS, T.J. HOOKER, PEEWEE'S PLAYHOUSE, and even SAVED BY THE BELL. And past that, sigh, is Wrigley Field and all the sports bars (not taverns, never call them taverns), and people walking the streets that I really don't give a damn about. Anyhow, here's 1932 Chicago. If Dillinger wasn't doomed here, I doubt anyone outside of Kansas City or Crown Point, Indiana would know of him. Like James Dean's grave. And the rumour of Jonny D.'s penis in formaldehyde...Wayne
Posted by Wayne Allen Sallee at 7/09/2008 09:32:00 PM

A formaldehyde penis? Sounds like the title for a Johnny Algiers mystery.

Batman--both the painted ones and the TV photo sets. I had them all. Two sets of each, because there was a puzzle you had to assemble with images on the backs and I pasted those to a posterboard to see the picture once I had them all.

The only other cards I ever tried to complete a set of was THE OUTER LIMITS. But, man, those were hard to come by. There was one drug store that carried them, and their supply was irregular. And there were about six of us in school who competed to get to them first. Plus some guys in grades above us who also liked them and also were in the race to nab them all. They were cool as hell because they were in COLOR, unlike many other TV show cards. And a weird, garish color, too. I'll never forget my pal, Billy Bridges, coming to school with THE JELLY MAN card! Oh, how we envied him that!

As for the gum...it was something I always threw away, along with (alas!) the wrappers. My pal, Wayne Culver's brother actually saved the wrappers. "Hey, man. They keep the cards in good condition," he'd tell us.

Oh, and I'll email you some pix this weekend!

Oh, dude! The Jelly Man was the rage when it first aired. That's all we talked about in school for weeks!

The dude's a lady!

Speaking of John Dillinger, I see there's Big Doings in Chicago On July 22!

And lest we forget, there's the John Dillinger Died For You Society.