Trying To Explain Sci-Fi Films of The 1970s 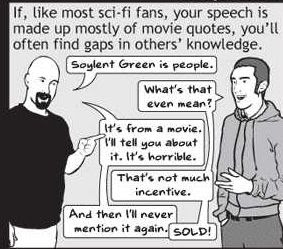 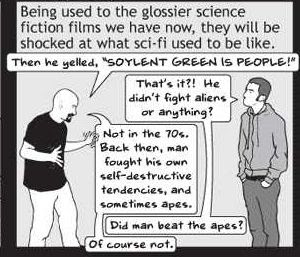 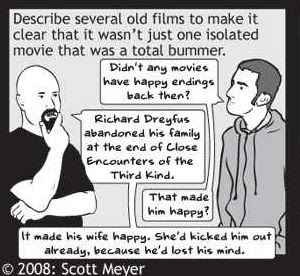 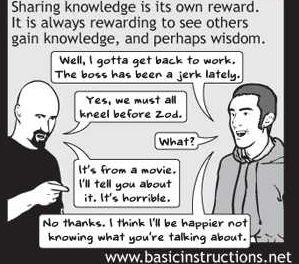 Rev. Lee sent me this cartoon which I found quite humorous, and instead of just emailing it to everyone, I copped it up for the blog. This shows is a great illustration for the generation gap, and it doesn't even mention tag lines from WEREWOLVES WITH WHEELS, ZARDOZ, and Ray Milland at the end of his career film, THE INCREDIBLE MELTING MAN, or THE TERRIBLE TWO-HEADED TRANSPLANT (with Milland and Rosy Grier: tag line by Grier's girlfriend, "Is that all you have two of?") Also the craziest ending in any film, Rosy and his girl and some black dude who probably was like Lamont's friend on SANFORD & SON driving around, playing the radio, and singing "Happy Days Are Here Again." Oh, and let's not forget THE GIANT SPIDER INVASION. I see another post in my future. And, no, that's not a tag line from the film...Wayne
Posted by Wayne Allen Sallee at 6/13/2008 10:30:00 PM

Good post! Hail to the King, Baby. Unfortunately no one can be told what the matrix is, you have to see it for yourself.Nobody calls me Lebowski. You got the wrong guy. I'm the Dude, man. I love the smell of napalm in the morning. Most of them died instantly, but a few had time to go quietly nuts. Gentlemen . . . we're history.Marines, we are leaving!

Why I remember when there was actual SCIENCE in SF. And some genuine speculation in speculative fiction. But then I'm awfully old and should have no attention paid at all.

I love that comic strip--thanks for sharing! It's kind of ironic, too, as I just said, "Kneel before Zod" to someone just the other day...

And don't forget Milland in "The Man With X-Ray Eyes", that grossed the crud out of me as a kid when he poked his eyes out! Very thoughtful moral though in spite of the scifi cheeziness....just how much DO you want or need to see?????

The Melting Man is even better done by MST3K! :-D

Zardoz was a great movie. but "Kneel before Zod" is the only decent line from that particular superman movie the guy is talking about.

I have never seen a lot of those schlock films. Some of them, but by no means all (or even most) of them.

I have a pal who loves all "crappy" films. When I asked him why, his reply was "I have a taste for shit."

I'll take his word on it.