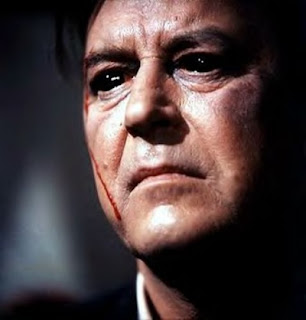 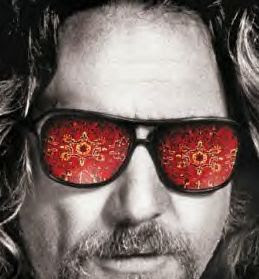 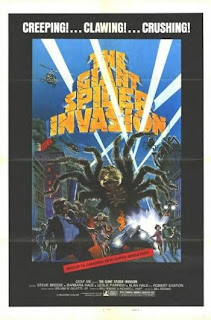 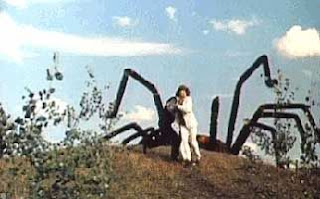 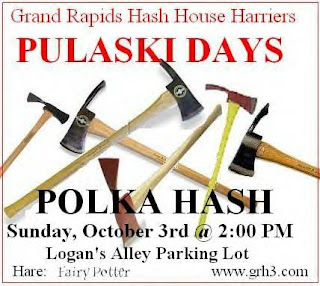 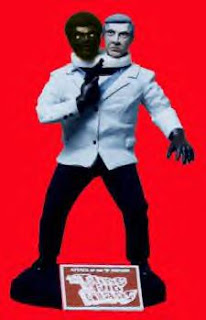 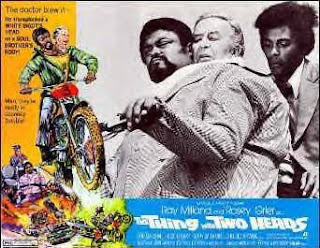 First off, Sid, quoting lines from THE BIG LEBOWSKI isn't quite like spouting Heston in, well, pick a film from the 70s. Secondly, DO NOT Google Image the phrase THE THING WITH TWO HEADS because you will see some actual photos of babies with vestigial parts attached, one photo I'm familiar with from when I saw it in a medical manual while researching my novella "Lover Doll" for LITTLE DEATHS. And third, Capcom, the film I mention here is one I caught in its entirety on MST3K, but as a teenager I was royally pissed off. Its really more a giant spider invasion in the sense of lots and lots of spiders, though there is one (sadly seen chasing Barbara Hale in her fancy pantsuit and heels down a rocky slope). Contrary to the poster, which shows TALL BUILDINGS, this thing was filmed in the middle of small town Wisconsin, AND during the middle of Polka Days. Posters are in almost every scene, not like what I've posted, but I love the idea of polka music AND a multitude of axes, all in harmony. Alan Hale Jr. (yea, The Skipper's last role and no relation to Barbara) was the sheriff of the town and in the MST3K version, he never talks, he just orders food or reminisces about food. When his character yells into the phone that people are being chased by a giant spider down main street (during Polka Days!), the voice-over is of his shouting to Domino's that since it's been longer than half an hour, his damn pizza was going to be free! I wish I could've gotten a photo of the giant spider, guys. A black tarp over a Gremlin--as Mitchum is my witness, an AMC Gremlin!--with those pipe things attached so that when the car drove blindly the pipe things would bounce off the ground, as if the spider's legs were moving, and also making it look like the spider's legs had various numbers of joints and it was also epileptic. There was some kind of background love story going on--besides the Skipper and his food order--and there were shots of the guy, his girl wearing Daisy Dukes before there was a Daisy Duke, before he got bitten by a tiny, tiny spider. Romance, terror, big name stars just before they died, and they even made room for Polka Days! And who could forget the AMC Gremlin, which I believe came in two colors, grape and the same shade of green you see in Elvis's Jungle Room at Graceland...Wayne
Posted by Wayne Allen Sallee at 6/14/2008 10:27:00 PM

Gads...movie producers of the 70s really had NO shame, did they?

The AMC Pacer also came in those two colors plus the same leopard print as the 100% polyester man panty bikini's Elvis used to favor, if you can believer the Graceland tour guides.

You're right, of course, some of those 70s flicks are ONLY good when accompanied by Joel or Mike and the 'Bots. :-D You could almost forgive the visuals sometimes, but the scripts were just inexcusable! Yes, Barbara Hale as a scientist inna pantsuit, heheh. But I loved the old style lab that she had, they don't make them like that anymore.

You have given me the idea for my next work--

Yeah, if you watch the movie closely, there's a shot of an old guy hovering over a plate of barbecue or something, then a rear shot of him, and they cut away just as he's starting to turn and look at the camera. I'm sure he was there for polka days and got dragged into being an extra.

But who wouldn't want to be an extra in such a classic?

"You're obviously not a golfer, man."