On March 18th, I Am My Own Constant 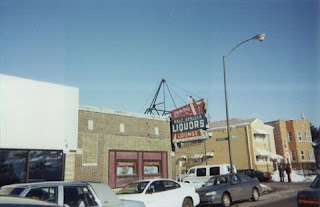 Everyone knows of the accident, 19 years ago this morning. Same kind of weather, rain with melting ice on the ground. Every March 18th, I reflect on how I've changed from that Saturday. I have more pains from being older, but I'm in better shape than when I saw the 55th Street Cubetia upside down at five feet in the air (a memory etched in my mind like a tear in my brain tissue). I feel as if I'm left behind by faster typists, but I was able to keep up with things in the days of Galaxie Twelves and dot matrix printers. Laying on the ground with the bashed leg, the trashed bones, the bloodied head. I learned to use my right hand for the first time in my life--look how fat that still-broken left hand looked, straight from Bobek's sausage factory!--and now my one right finger can still hit the shift key. When I was standing in front of Sid's tavern, I was wearing everything I had on the following Saturday. The bones tore through the turtleneck, a hooded sweatshirt, and the padded suede jacket in the other photo. Another setback, nine operations and part of my right hip in my left arm, a hollow spot Dennis Etchison once called "deadspace" in a story, and I'm left typing with one finger, my thumb in the air. Like I'm typing with a flesh pistol. So if I need a Constant, something to keep me grounded (or at least something to keep me from taking a dirt nap), I think of myself on March 18th 1989 and then on every March 18th afterwards. Exxon Valdez. Iditerod dog races. Hurricane Hugo hit during my fifth operation. Most days, I'm good. But I never NEVER think about Friday, March 17th, 1989, or any day before that. The days that I was still alive.....Wayne
Posted by Wayne Allen Sallee at 3/18/2008 10:21:00 PM

Wow, I didn't realize it was an anniversary of sorts. I'm glad you're still with us, glad we have the great stories that you've written since then. Glad I got to make your acquaintence.

You got hurt and you made it out the other side. That in itself is a great thing. That you can see the human and irony in life still is a testament to your ability to adapt. You may be different now or less pretty then you were, but which of us isn't. I have an anniversary of sorts this week also, not as traumatic as yours but still it makes you reflect. My dad died 1 year ago after an 11 year battle with end stage renal disease and heart failure. I dragged him forward in life the last decade but he got to know his grandchildren and we got to know each other better as people. Maybe you made it to the other side so you could teach some of us how to go forward with grace and a smile even when the first inclination of any human is to snarl first and smile later.

You live Wayne, not because of a medical fortune, but because you still have work to do making us smile and making us realize, no matter what shit the universe drops on our heads, we still must go forward.

I second Mike's thoughts on your purpose post-3/18/89. I know my world would be dimmer if you weren't in it.

I'm sure glad as hell you're still kicking!

I'm sure glad as hell you're still kicking!

Sometimes your posts leave me speechless. I only post this to let you know.