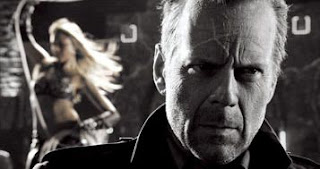 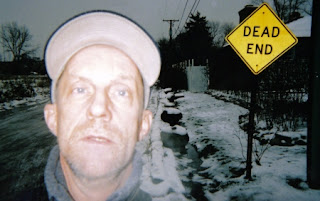 There's always been talk that when I shave my head I can look like a decent Bruce Willis, but with sunken cheeks. I blame that on the four bottom teeth I knocked out with my own fist from my broken arm, after I was hit by the car in 1989. In 2002, when we hosted the World Horror Convention, I put in my bio that I'd be the guy looking like Willis hit by a disfiguring ray. That quote still is bandied about at different get-togethers. Myself, I see Andy Sipowicz's bags under my eyes and Abe Vigoda's crooked nostrils. Willis is the man, and I my guilty pleasure is a Kurt Russell film, but one thing I can say, I can never be compared to Mitchum. It all comes back to him...Wayne
Posted by Wayne Allen Sallee at 12/22/2007 10:35:00 PM

You know, I always thought everyone was wrong about the quality of that Elvis movie with Kurt Russell and Kevins Costner. That's kind of the ultimate Wayne movie isn't it?

I can see the resemblance. But my eyes. My Eyes!

Gads. Did you have to pick a shot of Willis from SIN CITY? I freaking hate that movie. It would have been cool if they'd made a two-hour film of the part with Marv in it. But, no. They had to do three films, two of them totally sucking baboon ass.