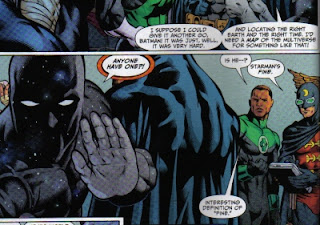 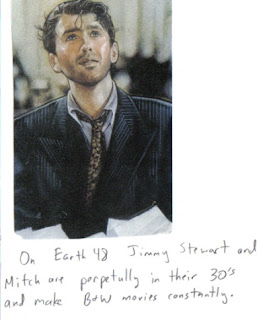 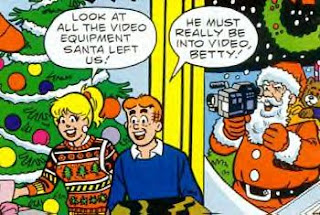 Anyone who reads comics is familiar with breaking the fourth wall, and for those who are still confused, Starman might help you out with his questioning "the audience." Chris Turek sent me this Christmas card today, and yes it would be great to see a world Eternally Mitchum. Clouds would wave hello and it would rain vanilla ice cream or Seagram's gin. All pizza would be free. Oh, and dolphins could talk and prove their superiority over humans, as I've always suspected. The last panel of my entry is included not just for its creepiness, but because Santa looks very much like the guy that Chris and I worked for at that comic shop fifteen years ago. Oh, one more thing. Just like in BLADERUNNER, there would be floating advertising cubes, only with photos of Bobby the Mitch in alternating teal and magenta backgrounds. I think I could live there...Wayne
Posted by Wayne Allen Sallee at 12/22/2007 05:05:00 PM

Where the hell have I seen that Archie cover? Someone posted it before. Here? Yes, it's creepy.

I love BLADERUNNER. I've asked for the new DVD version for xmas. I hope Santy Claus brangs it.

I used to know a crazy racist comic book artist. At one time he lived in a little one-room house/studio in his mom's back yeard (when he had to pee, he'd open the door and go outside and take a whizz beside his little house...if you were visiting and had to pee, he'd send you out to take a whizz beside his little house). At any rate, this crazy bastard had the idea of ads that floated around in the air. They were digitally projected everywhere, but were independent of any projector or solid surface. So they'd just float in the air and you'd have to look at them unless you closed your eyes. You could be out backpacking in the deepest wilderness and these pernicious little ads would float around you. It wouldn't matter where you were or what you were doing. He even had ideas that they would appear on the moon, making of it a billboard.

He also believed that everything that Whitley Streiber wrote was truth, that grey aliens were going to take over the Earth. And he believed that the Germans were justified in attempting to exterminate all of the Jews.

Yes, a most crazy bastard.

Some think that dolphins & whales were once land dwelling and decided to (as much as evolution ever gives way to conscious decision) to return the sea.


Whales are composing a poem that covers the entire history of their time on this planet.
Dolphins are just rowdies who found living on land had to may rules.


Hey. You ever read any of Rudy Rucker's stuff? Funny as a pigeon shitting on "W"s head during a rose garden photo-op.
Part of the magic realism bunch here in the US. Sort of a quote " a lot of the ideas for that (Software, WetWare etc) came from being in a shopping mall and pretending people had been de corticated and their brains replaced by some kind of alien parasite.) Most of his stuff is laugh out loud funny.