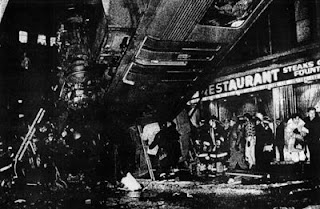 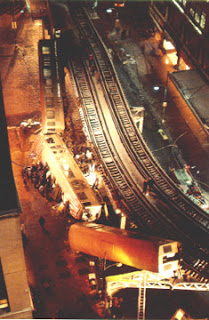 There are those "Where where you?" questions people ask where you fill in a date, 9/11 having pushed JFK's assassination away from first place, at least for my generation. As with other cities, and other countries, those "Where were you?" questions are compartmentalized to a certain area, even to certain people, i.e., commuters. My friend Von was working in the Loop when this happened, though the accident occurred before her regular step-on point. I had just started college and knew of the el because of going to get my college texts at used book stores on Clark Street's then-Skid Row, although I took the bus and passed beneath the el at both Van Buren and again at Lake. In my opening lines of PAIN GRIN, I use a passage I wrote years before ever putting it in a book: "I once thought that the loudest thing I could hear was the passage of the el train at the intersection of Wabash and Lake." No doubt, it was the acoustics from the back end of the Chicago Theater and the thirty or so floors of jewelry stores in the Mossner Building, but the sound was like nothing else you could hear when you were downtown. During the late 70s, we had terrible winters, with snow, then ice, then snow on top of that. Weather like we are having this week but with weeks worth of frozen snow on the ground, and the train trestles. The Lake Street train (the Green Line) came around the corner and hit the Brown Line train (which eventually travels north and west). The train cars buckled up and came off the tracks and kept tumbling over the ice and towards the ground. This was on a Friday rush hour run. 11 people died, 2 on the ground. Steel I beams have since been erected at most el curves, directly because of this accident. Imagine the days without cellphones and text messaging (which I have now found the newest generation to call texting)? Passengers on Flight 93 knew what Mohammed Atta and his crew had done back in Manhattan within minutes of the towers falling. Several summers ago, a back porch on a three flat fell upon the two underneath in an alley near Wrigley Field, pinning people underneath boards and nails. The thing I recall more than anything else is one person telling the news that they were in a tavern nearby, and within seconds of each other, almost every cell phone started ringing. In 1977, people were trapped in those cars, not able to tell their families that they were OK. Because the train ride is a routine, when I worked downtown, I was on the Orange Line train that entered Quincy Station at 5:14 every evening. Families knew which trains their fathers or mothers would be on. Today, I am hearing stories about that day on the news (overshadowed by pre-Superbowl party coverage), and in a few emails. News stories are compiled at http://www.chicago-l-org/articles/1977crash.html which is where I acquired the photos posted above. The photos always look surreal to me, in a city that seems bizarre on a daily basis. Wayne
Posted by Wayne Allen Sallee at 2/04/2007 01:27:00 PM

Each country have their own pain, somes pain is allready lasting years but no means of letting the world know.
Others have the tools and means to show the world their pain.

I was in standard 9 when the planes hit the twin towers, my sister was in matric, i remember we were on our way to her sunbed session for her matric dance, and i was so shocked when i saw it on tv.....

I definitely remember the el crash. I was actually off work and had done some shopping afterwards; I walked directly beneath the curve where the trains fell not ten minutes before the accident happened. There have been several lucky moments like that in my life (and most people likely have them-- they just don't realize it like this). I call them "swings" [of fate]. There have also been unlikely swings, the most glaring of which was that first big Illinois lottery in the 80s (1984?) when Michael Witowski, I think his name was, won something like $43 or $64 million dollars, the first of a jackpot that size in Illinois. One of my tickets was a Quick Pick, and it was one cycle down from the winning number in EVERY SINGLE digit. Gotta love the swing.

Its interesting that 3 of the 4 comments on this came from my South African buddies. (Von made her entry after I reminded her of her involvment that day in '77). I sent Drizel the story I wrote after 9/11; share amongst yourselves if you want her to forward it to you.

I'm old enough to remember the el accident, but I didn't live in Chicago or anywhere near it; so I have no particular memories of it.

9/11 seems to loom so large still. We had a death in the family the day before, so we were already very grief stricken. 9/11 just made it seem as if the whole world was mourning with us.