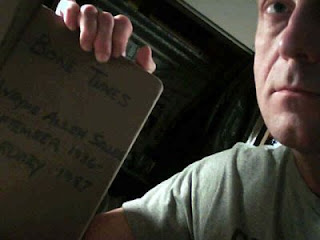 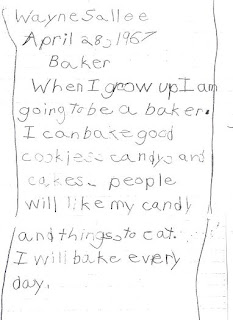 When commenting on my writing a few days ago, drizel (etain) typed the sound of an old electric typewriter; I did her one better, saying that I had a manual typewriter, a Smith Corona Galaxy Twelve, which was given to me in 1977 for my high school graduation. But I do miss that paeting! sound, because it meant you had finished another line of whatever you were typing, even if you weren't watching the progress, because, like me, you might be looking at the keyboard as you type. I also write in journals, because of so much time commuting and/or waiting on public transportation. Here's one of the oldest journals in the 2nd photo. And, just for the hell of it, the composition I wrote in second grade. I seemed to want to be a baker when I wrote this, and I must have been hopped up on penicillin at the time. I was sick a lot when I was young, and always had to carry the pills to school. I can only imagine with our Zero Tolerance Policy, I'd likely be doing hard time as a repeat offender. Hmnnn, maybe then I'd be a baker, working Cell Block D in Stateville. Behind (iso)bars, Wayne
Posted by Wayne Allen Sallee at 2/03/2007 06:19:00 PM

Ahhhh how cool is that letter....Love it, a baker, you would have been creative;)
My dad has an old old type writer, that uses that black and red ribbon with those striker thingies, I must actually take it out of the garage..I always loved playing on it when I was younger, typing all type of weird things I just loved those strikers going tik tik tik tik tik.....hhmmm...memories are the best!

I got a Smith Corona electric when I graduated in 1980 and kept it for years. I wrote all my college papers on it and four "trunk" novels and a host of false starts as well. I remember the way the keys felt, and I recall the smell of it well and fondly.

There were two kinds of ribbons, nylon and film. Film made better type but didn't last as long. Nylon would get threadbare and start producing faint print.

Nice post. I like the writing in 1967.
why did you had a dream to become a baker?

I had an electric typewriter through college as well, and wrote a really bad Louis L'Amour Pastiche on it as my first novel. As for being a baker, at least if you can't sell the food you make you can eat it yourself. The same can't be said of the crap writing I've got piled up in various files.

I grew up on a typewriter. My mother was a secretary. I think I type over a hundred words a minute, although I haven't timed myself in forever.

Speaking of Cell Block D, I think that would be a great place to get some writing done. If they served cookies at bedtime, that is.

A baker. Go figure. Corinne, I have NO IDEA why I wrote that, maybe I was on a deadline. Drizel and Sid, the one I had had the red & black nylon ribbon that I eventually had to rewind manually. Charles, I agree about not being able to subsist on the pages we've both thrown away and, Stewart, if I was in prison, I'd be the guy not in the weight room. But I doubt I'd be the cook, and I'd probably not get far in writing too much, either. But I might end up with my own talk show when all was said and done...