The Worst Fog I've Ever Walked Through 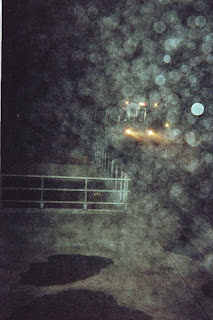 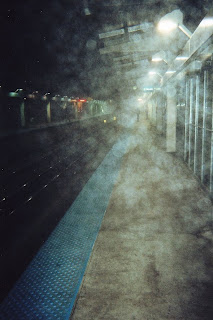 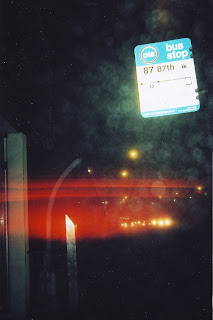 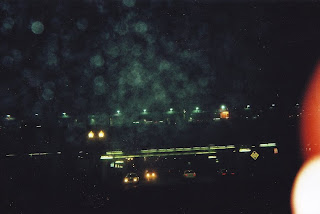 Finally got the situation with the film fixed, so I'll put a break in the Pago Pago photos. Last Monday night, there was fog to begin with. This was expected. We've had fog when the weather pattern is like, we're going to make you think it will rain, but no, it won't. Now, the photos aren't great, but to be honest, I didn't they would come out at all. There's the platform as I could feel myself literally walking through the moisture, it was like blinking yourself awake after nodding off for 1/1000th of a second. Then one from 87th and State, the bus approaching, though that weird orange line is there. Last photo on the roll. Then the el platform at Fullerton, I would look up at the lamp, blow air out of my mouth, and watch the fog push my breath away. Then, the train arriving. You could feel the rumble, then hear it, and, as I stood at the very end of the platform, the train was visible less than a second before making it pull into the stop.

I've seen fog like this on the occasions that I have had to walk to the bus stop at 5:30 AM. And as I walked that half mile home from the bus stop, with no cars, no houses visible, I felt detached from time itself. Like I was just walking and was never going to stop.
Posted by Wayne Allen Sallee at 3/13/2010 11:25:00 PM

The pertinent question is: did you meet Adrienne Barbeau in The Fog? I rely on you to gather news.