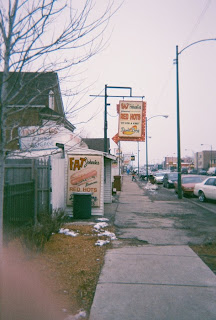 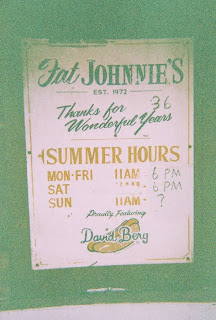 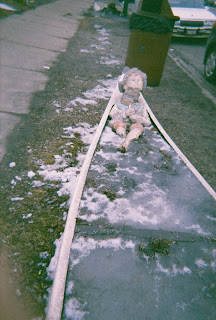 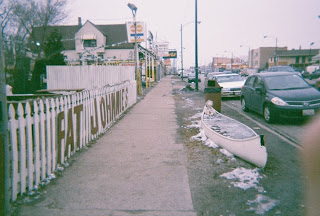 Pardon the quality on these next week's worth of photos, last Friday was a grim day. Having to go to Holy Cross that afternoon, I took time after to take some photos along Western, last time it was Lithuanian Plaza (or 69th Street) about four blocks west. I'll post those later, but here is Fat Johnnie's, an actual hot dog stand! Cripes! I'd seen photos of it, but really had not known it was actually still there. And it has been quite a while since I saw the Dave Berg name on a hot dog sign. The craziest thing, as you can tell, is the frozen waif in the kayak filled with ice. After getting my two dogs with steamed, poppy seed buns, I asked the man who was presumably Johnnie (because of his age), what the dilly-o was on the kayak. He told me it was a flower pot when it warmed up. I liked that he called it a pot and not a garden.

I have taken to posting photos on Google Earth via Panoramino under the name JonnyAlgiers. I put up a few of the 16th Street Bridge, the subway, like that. Oh, and Bubbly Creek. Can't forget that. Saw the Book of Eli film yesterday night and loved it, then I swiped a pair of glasses to see the last thirty or so minutes of Avatar in 3-D. I didn't mind sneaking in because I knew I'd never see the film because I can't see in 3-D, period. But I wanted to check it out past the shots on TV. Well, karma got me as I watched for a bit, my head starting to hurt, then I left and vomited white stuff in the bathroom, and again at 3 this morning. Headache all day, but I get them this time of year anyways. Karma's a bitch.
Posted by Wayne Allen Sallee at 2/07/2010 11:17:00 PM

Is it wrong that now I want a Fat Johnnie's Hot Dog too?! :)

Love that canoe pick. Something feral and sad about it, yet compelling.