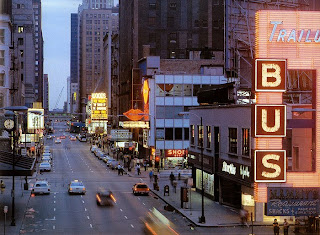 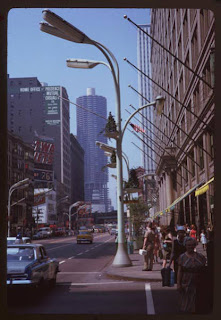 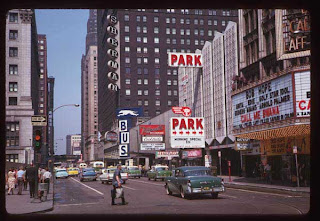 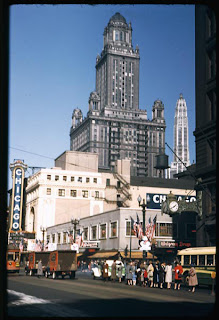 I ended up having to take the Orange Line to Midway and then grab a cab home, on a night during a week where I am the brokest I have been since last August. At least it was a nice cab ride, an elderly black guy in a white turtleneck had BBC on the radio. I didn't want to chance getting the 87th on the Red Line before my last bus as the subway was slowed to a halt because of a water leak on what I've since found to be the Harrison Street platform, ironically the same stop where I took my reflected photo last Monday. But even though it has been getting warmer by a degree or two, I wanted to just climb on up the steps from subway to street to platform and get on what amounts to a pretty cold train in winter, as the doors open and shut fairly quick and we are about three stories in the air. I'm a bit perturbed that I felt colder than I should have. Ah, well. I'm home now.

All of the above photos I've posted were taken from Skyscraper City's Chicago thread, and before I name the original poster, I'll make certain that I know that one poster isn't simply cut & pasting from another poster. Confusing, no? This, well, most of it, is Block 37. The Spaniel Block. The setting for my novel and the street where I ascend or descend from/to the subway. You see more of the north side of Randolph (with the old Greyhound depot) than the opposite side, much more evident in The Holy Terror, but there's the old Woods and United Artists theaters. Restaurants whose names I vaguely recalled from my college days. The Shoppers corner is now a Borders. I once waved a dildo around in the Shoppers Corner thinking it was a Star Wars light saber. True story. But check out the photo with the Trailways sign. When Greyhound moved up towards the U of I campus, it gobbled up Trailways with it. Right there at ground level. Mammy's. I LOVED that place, it always smelled like pancakes and maple syrup. You'd wait for the buses on the second floor, then walk down a side hallway. Mammy's wasn't just a depot diner, it was a decent size. I'll find more photos and look through more links over the next few days. After Bubbly Creek, Block 37 is the place I'd haunt next. And if they made cars the way the did in the 60s, I'd make myself learn to drive.
Posted by Wayne Allen Sallee at 1/18/2010 11:25:00 PM

I still haven't read the story from yesterday. But I will.

Interesting stuff. What happened to "Mammy's"? Sounds like a great place.

myhmmmm, pancakes and maple syrup. You know how to hook THIS reader, my friend.

I do NOT miss those Arctic winter winds!