40 Minutes, Any Given Day 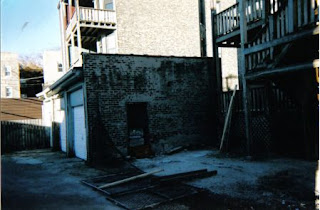 Thought I might post a shorter story tonight, the photo is a few blocks from where the tale takes place. This is one that is back to my usual world. Bob commented that "High Moon" was an unexpected supernatural story from me. It started out as a western, it really did. I was named for my dad's high school buddy, Wayne Henley, who passed away from cancer two years after he saw the story in FIENDS BY TORCHLIGHT. He had always wanted me to write a western, and told me so in person when I last saw him in Shelbyville in July of 2003. His son David had driven Wayne and his wife Bobbi up from Madisonville, and we joked about "Two-Gun" Henley, and I of course knew I'd have to make a twist. So One & A Half Gun Henley begat spirituality begat werewolves begat an homage to the Gary Cooper movie and there you have it. My namesake enjoyed the story, but was somewhat confused seeing himself in print. I'll not be posting stories this often, I just thought the idea of hearing something read out loud sounded neat, as opposed to listening to my usual ramblings. During the week, I'll pick up on my reading from PAIN GRIN and posting on YouTube.

40 Minutes, Any Given Day


Jimmy Vaughn had been slumming Chicago’s latest upscale neighborhood since late August. He had a name that sounded like he just graduated from the cop academy, but that’s as far as it went. Just turned forty-five and a Chicago native, born in Humboldt Park when it wasn’t overrun with blight, Vaughn still looked like a hard-traveling paladin who never worked a job that had decent health and dental coverage.
Those who first met Vaughn found him to be a cipher, a thin guy with decent upper body strength who always seemed to never have his blond sideburns the same length, even in bad lighting. Turek the bartender at
Uptownjo’s, the “e” in the name shot out by some meltdown who’d been aiming for the street light on Agatite but missed by about thirty feet, nailed it best, that the guy moved around, always with a notepad and pencil, running from past loves or dreams, a wannabe romance or a crappy childhood, born of the generation where fathers still folded their belts in half and put welts on their sons’ balls. He thought Vaughn never did time, though he had a nervous tic that sometimes put a tiny smile on the right side of his face, the kind that ex-cons made so you’d think you’d mistaken them for someone else.
He’d sit on the steps of the Uptown Theater, shielded from the autumn rain, and this was how the waitress at Uptown Pizza & BBQ had first met him. They dodged the flat, wet drops, jaywalking the whole way. Just the fact that she worked at the place everyone knew as The Greeks regardless of the sign and menus was a testament to the neighborhood going upscale. Inside the joint, a bunch of surly guys in sleeveless tees who all looked like they had just walked off the “White Lightning” set in GREASE, would wait on customers from behind a stainless steel counter and flirt with the women while they juggled three orders at a time.
To compete with the pretentious bistros across the street, the owners hired a waitress and had some tables and plants on the already cramped sidewalk. The girl’s name was Rasa, a nice Lithuanian name; when she asked about the notebook, Vaughn explained that he wrote stories about people, places, sold a few but mostly had them posted on a Chicago neighborhoods website. He wasn’t looking for fame, or anything else, though he kept that last part to himself.
The rain stopped and Rasa went away with his order. She had interesting elbows and thick eyebrows. When he wrote about her, Vaughn thought he might change her blonde hair to violet, change the lipstick color, as well. He’d eat first, maybe talk some more. Rasa had time to talk–the rain had likely kept people away and they were just thinking on what kind of overpriced lunch they’d have when they walked over with their iPods and cell phones set on vibrate.
Rasa was surprised that Vaughn knew of the old Lugan neighborhood out south by Holy Cross Hospital and Queen of Martyrs. He mentioned a restaurant on 71st and Rockwell named Niringa, but that was before her time. She had a roommate and Edgewater was just too expensive; now it looked like Uptown was headed this way. Apartments reverted to condos, yet she never saw a single person on any of the balconies with the promised lake front views. Vaughn laughed in agreement. She heard that a Coyote Pizza was going to open next to Tony’s Billiards, the pizza joint coming from Seattle, land of Starbucks.
The crowd picked up and he paid his tab, shaking her smooth hand and smiling a goodbye. That lopsided smile again, but Rasa liked it.
Vaughn was pleased with his day, walking back to his small room at the Darlington. First he stopped off at the Unique Thrift Store, thinking he might find a Hallowe’en tie or a black shirt with skeletons on it. He struck out there and cut down the alley behind Sunnyside. He’d been told it used to be officially known as Rehab Alley; now there were signs that warned: animal feces carry viruses, in big red letters.
A garage door was open, Vaughn at first thought nothing of it. Then a glint of silver, that was honest to Christ all he saw, and he was on the ground, his right pant leg sliced and blood spurting from his femoral artery turned his pants leg and belt buckle shiny red. He was kicked in the head, felt his wallet being grabbed. Footsteps running, faint. No one on the gaily flowered terraces all over his fucking range of view.
He thought of Rasa, the cracked concrete of the Uptown Theater, Rasa again, then a story idea he had started. Instead of AA being Alcoholics Anonymous, it was Afterlife Anonymous.
“Hi, my name is James Vaughn and I’ve been dead since October 22, 2004.” Then all the ghosts and zombies reply “Hi, James!”

He laughed thinking about it and a bubble of blood came out of his left nostril. That’s when he knew that this was it. Vaughn thought of the sweet lepeshki he ate in the restaurant in Lithuanian Plaza so long ago, thought of Rasa with violet hair then blond again, and he died staring at the sign warning that dog shit was something upscale neighbors could or would not tolerate.

A shitty way to die!