Too Cold For Anything But Juvenile Humor 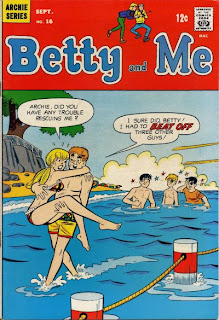 Cute-ass Betty aside, the unfortunate joke is that Archie had to "beat off" three guys. Almost as bad as Jack Kirby not understanding what "get your rocks off" meant (he used it once in a Capt. America comic).

Bob, that was indeed my point in posting the cover. The writers never got the Out-of-Context thing right. But, yea, I'm a Betty fan (Betty Cooper AND Betty White), and, it is always ridiculous talking about comic-y comic bok characters, I'd never give Veronica a sideways look. Midge, now...

Don DeCarlo did the art for years, and created Josie & The Pussycats, I believe. Look him up, as he branched out into magazines that paid quite a bit more for his services.

Midge was always a dangerous way to go. Big Moose was very protective of his squeeze. Of course that never stopped Reggie from sneaking around...and I even recall a couple of stories wherein Archie tried to tap that (but unlike Reggie, I don't remember Archie having his ass kicked by Moose). Yep...I think I read every Archie comic published between about 1956 and 1972. Man, I miss the old man's warehouse of comics. Alas...

So you must know about Don DeCarlo's career, right?

Wow, I used to spend hours in the drug store reading Archie comics when I was a kid, and all that double-meaning stuff went right over my head. Still does sometimes I suppose.