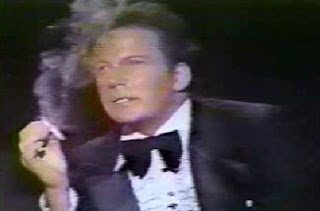 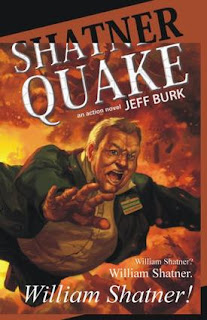 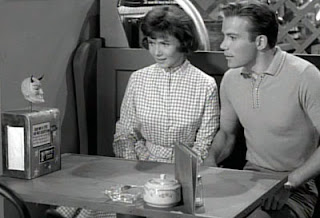 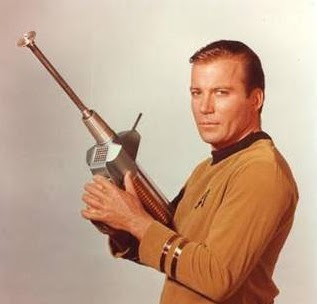 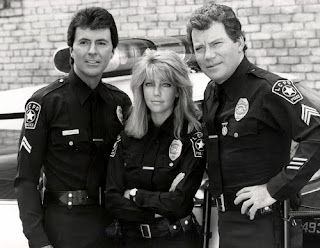 I was going to title this post Zero Hour, Three AM, but I'm not certain how the actual words to "Rocket Man" go at the very beginning. All I know is that when William Shatner is smoking and doing his, um, rendition of that song back in 1979, he sure as hell looks like Jack Lord. Well, Bob asked me about my anger at scanning the shelves at Borders, and I told him its not the genre, more the gimmicks that get to me. The tie-ins, crap like that. I'm much happier in a used bookstore. But what did I do but buy a wacky book via Amazon, after someone sent me the link. Regardless of what the book was about, I had to own something with Elvis-bloat William Shatner on the cover. Dig this, though. There's something called a ShatnerCon, and the novel involves an invasion of all these variations of Bruce Campbell. And then there is a fight with all these alternate versions of Shatner. Capt. Kirk, Denny Crane, T. J. freaking Hooker, Priceline Shatner, the above-mentioned Rocket Man Shatner, and hopefully, Twilight Zone Shatner. Now, a lot of people remember "The Terror at 30,000 Feet," the monster on the wing of the plane episode. But my favorite, the name escapes me, has Shatner and that hot chick sitting in the diner and on the table is a little box with a devil on it who will give you a fortune (I think its a fortune, its been awhile, I just dig the atmosphere of the story itself.) I doubt there's any TZ characters in this book, which seems insane enough as it is. Regardless of the writing, I'll enjoy envisioning each character. And there IS a YouTube of "Rocket Man" out there, so be warned.
Posted by Wayne Allen Sallee at 12/16/2009 11:10:00 PM

Shatner does it here, but Stewie of Family Guy references Shatner here.

I love that other TZ with The Shat. The little devilhead machine gave you answers to your questions, ambiguously, like an 8-ball. When I was a kid I kept thinking, "Mister, just walk away from that thing, be a man!"