The Time I Hitched A Ride With A Possible Serial Killer 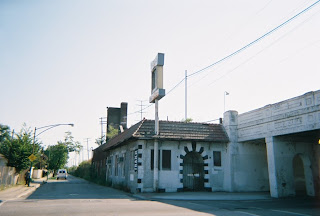 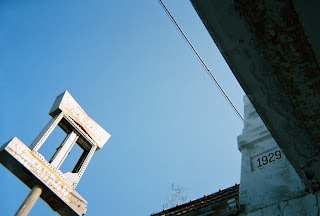 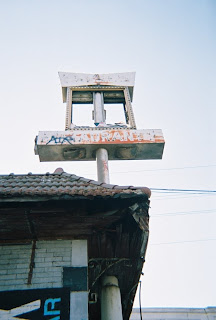 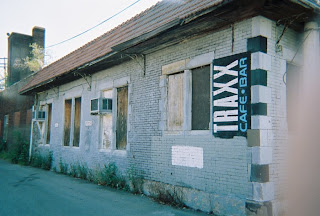 This is kind of sticking with my October monster posts. I've been wanting to write about this experience for a year or more, and now that I have photos of Traxx I have no excuse. The bar is at the side of the Grand Trunk RR, which allowed for viaducts all along Central Park, and the 8th District cop house was barely a block away. Aside from whatever the restaurant was called, as seen in the sign, the bar had several names before it stayed Traxx. I knew this because I would see it from the front of the Royal Typewriter place where I'd buy my Tandy floppy disks for my word processor in the late 80s. We had my dad's 25th anniversary as a cop there in 1987, but I can't recall the name. Anyhow. It's closed now, Royal is gone, blah blah blah.

In August of 1993, I was at Traxx for a sort of premiere party. Hart Fisher of Boneyard Press had put together this deal and I was there signing copies of my Richard Speck comic. The Brandon Lee comic had also just come out, but Hart had only a limited amount of copies. My friend Greg did the cover for that one. Well, I had to leave to get the last bus up Pulaski. It was a crazy, humid night, and there was fog all over the place. We get that a lot, though normally you see it in the false dawn, closer to 4 or 5 AM. I can see the lights from the cigar store but not the Indian, to help you visualize. Another block up (I had a half mile walk), maybe on Hamlin, I see the bus go by, like a mirage. Couldn't hear it, the air was so thick. So now I had to walk from 63rd to 85th. I'm contemplating what to do, there was no place to call a cab, I'm thinking maybe take the 63rd Street bus to Western, then up to 79th and back to Pulaski.

Well, a car pulls up, the windows down. An overweight guy chewing Clove gum is behind the wheel. Asks me if I want a ride. Now this is where it gets plain stupid, not because I accepted the ride, but because my reasoning was that I could then write about the experience one day. Which I am, sixteen years later. He told me he worked second shift at this factory by the Stevenson off ramp, the name escapes me, but there was always a flashing red light behind these glazed windows. That placed is closed now, too. As the guy is talking, telling me he's heading to 95th Street, I'm checking things out. Nothing in the back seat, the door handles and knob weren't removed. No way the guy had a gun (yea, I know, there's always someplace), because he was blobbish and seemed melded to the steering wheel, his pants and shirt stretched tight. Still, I make up a fake drop off point, the Texaco at 83rd. If things got bad, I could cut through the Texaco lot and head to this weird street named Crestline that absolutely no one knows about unless they live in the Scottsdale neighborhood, it was two blocks long, but by car it took you awhile to get to it, and only via 81st Street. Yeah, I know all the streets in this crummy town.

Sooooo, I get. in. the. car. He talks the talk, everything is cool. Until we hit the Texaco, closed for the night. Then this happens. I can still hear his voice and smell that damn Clove gum. He clutches the steering wheel like he was a pilot trying to keep his plane from going into a dive. He starts crying, sobbing, saying--word for word--"Oh God Oh God why can't I just live my life and not want to do these things...and I was out of that car like lightning. Down the alley, which, stupid me, I thought was too narrow for a car. Silly me, there were the headlights. I hopped a chain link fence, choosing a yard where I knew he couldn't follow, as some backyards had ridiculously low fences. I then ran down to Crestline, realizing that I had a choice of staying there or go back to Pulaski or 83rd and see him waiting in his car. Or out of his car. The fog had lifted, and damned if his car didn't come down Karlov, turning onto Crestline. It was like a ghost car. I actually climbed behind some bushes, after grabbing two large rocks, just in case. The car went by, turned down Komensky then west on 82nd Street. I ran back the way I'd come, cut across Pulaski and past Frano's barber shop (which was, oddly, on the side street) and into the alley. I then zigzagged through several connecting alleys until I hit 85th and Springfield, then ran to my house, three in towards Pulaski.

I really, really want this story to be told, so I can be done with it. One day it will fit into a story, the smell of the gum and the vinyl on the seat, the sweat on the guy's face, his black plastic glasses. So there it is, maybe the stupidest thing I've ever done. There it is.
Posted by Wayne Allen Sallee at 10/04/2009 11:37:00 PM

Glad you got the hell out of there. There seem only two possibilities to me. He wanted to Kill you or F you. I believe it's a good thing you didn't stay around to find out which.

Creepy as all hell.

At that time of night/early morning, with no public transporatation to speak of, any of us might have made a similar lapse of judgment. At some point survival instincts kick in -- with luck, not too late.

I've always had a feeling the entire Southwest Side was a kind of training ground for serial killers. Almost everyone I grew up with out there has a "DON'T GET IN THAT CAR!!!" moment. Seriously. There's gotta be a map somewhere, maybe in Serial Killer Central, where everything south of 43rd Street and west of Western is highlighted, with big red lettering at the top: "HERE BE VICTIMS."

And so we survived.

But as Gene Wolfe said about artillery in Korea, "Shit! That was close!"

By the way...have you ever read the story of how Debra Harry was almost one of Ted Bundy's victims? She got away because the window on the VW bug was rolled down a little and she was so thin that she was able to squeeze out while he was trying to restrain her.

Christ almighty. This brings up memories of my own leaping out of a stranger's car, years ago...

I'm speechless. What a story.

John Wayne Gacy tried to pick me up behind Kelly High School when he was doing work at the pharmacy at 47th and Rockwell. I didn't realize it was him until after he was caught and photos of him were all over the place.