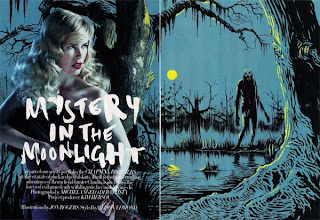 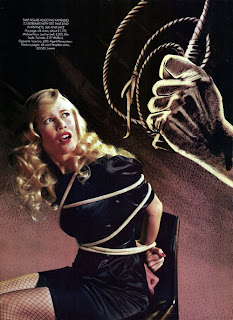 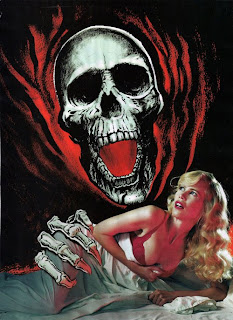 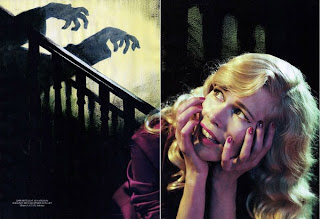 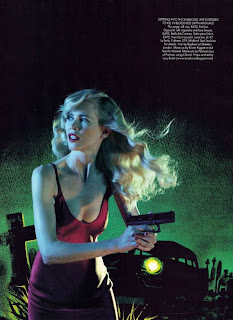 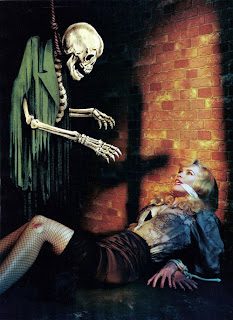 This is more spooky stuff, though I like the noir image with the car. Sid Williams sent me this link, Claudia Schiffer in the November issue of UK's Harper Bazaar. I told him of Chicago's DBB (Days Before Borders) and how we had Kroch's & Brentano's, Waldenbooks, Book-A-Million, Crown Books, and Bookseller's Row. Now there is only Borders, a few Barnes & Noble scattered around the city, and Quimby's on North and Wolcott, and after-words, on Illinois off State, which has a fantastic selection of used books in the basement. They also send me birthday coupons every year, but I'm not biased. I told Sid how the Kroch's & Brentano's not only carried the UK editions of magazine, but everything in French and German and Italian. Not just magazines, but newspapers, too. After Borders came to town, all the bookstores I mentioned above closed within four years. Oh. I forgot The Stars Our Destination on Belmont. A great store run by Alice Bentley. What a beautiful place it was. A few blocks down, there was a much smaller store, a father and son deal, they went under, too. I bought a hardback copy of BEN-HUR, copyright 1914, for four dollars. I've mentioned this one before, I also picked up some guy's 1939 diary. He worked for Harris Shirt Co. in the Loop and got a raise to twenty dollars a week. Seventy years gone, baby. Man, I have dementia. The best bookstore of all, also on Belmont (pretty much everything is on Belmont, right off the el tracks, from an Army Surplus store to Egor's Dungeon), the Gallery Bookstore, run by Bill Fiedler. If I had an extra hundred dollars--the found money kind--I'd spend most of it there, buy me some Sax Rohmer books, some hard-boiled mysteries from the 40s, and a few books that were made into movies, like a hardback of ANATOMY OF A MURDER. All of these are rather cheap, but I want to one day buy as many as I can carry. A $#!tload,, one might say.

But my main point, before I went off on a tangent, although it was one that brought back memories for me and likely those from here in Chicago. Rich Chwedyk. Scott Kroll. The displaced Chris Turek. Wally Cwik. Back to my main point already, I sincerely hope that the CEO of Borders has nightmares every night and will soon crap in his pants uncontrollably. Trick or Treat, Mr. CEO, I'm the candy-colored clown they call the Sandman, and I'm dropping some Murray Leinster books on your sack. Thanks for nothing.
Posted by Wayne Allen Sallee at 10/13/2009 11:42:00 PM

I'm surprised that Schiffer would do an editorial layout like this. I read an article about her and she was quoted as saying that she won't wear anything like sweatpants because she can't stand anything that's "vulgar". Maybe older age has forced her to begin shedding her hoity-toity sensibilities.

We still have Books-A Bazillion here in Knoxville. And Borders, B&N, and also a huge two-storied Sears-sized used media store called McKays. I've been looking for some of your books there.

I like the blonde. She's famous? She should be.

I, too, miss the great bookshops of old. There are hardly any indie bookshops left these days. We only have one indie new bookshop remaining in Charlotte. I haven't been to Atlanta in a long time, but I think there are still some good ones there...more than in Chicago, I think.