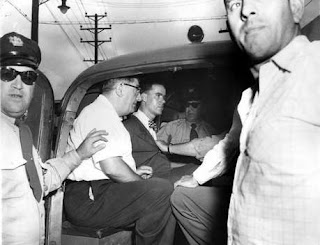 I'll bet most everyone of you have no knowledge of Unruh. Back in the 80s, I looked him up on the basis of his name alone. We have Gacy, but also, the south side of Chicago had Richard Speck, more a localized mass murderer. Unruh was the same kind of killer, though I doubt if anyone in Camden NJ remembers the events of 1946. Mostly because Camden is a bankrupt town. I missed out on Unruh's death in the NJ mental hospital at the age of 82 because of that project I was involved with. The guy had problems after WWII, taunts from neighborhood jackasses the kind of which I am all too familiar with. What made him snap was when he came outside on September 6th, 1946, and found his gate missing. He then took his Luger and walked around the intersection of two streets, killing a dozen people and wounding others. Killed a kid in a barber chair, then the barber. Killed a guy who sold his folks insurance policies that he thought were worthless. Shot a ten year old peeking from a window, the kid died the next day. He walked back home, the shootings took seven minutes. Surrendered after cops tossed tear gas in his bedroom window. Now Camden was a small town in 1946, and is still more a crappy suburb of Philadelphia, the old Naval Shipyard separating the two states. But there was no doubt he did it. And he might have been flat out nuts. But if this had happened in Chicago, I'm sure a cop's gun would have gone off unintentionally. That happens here, six bullets fired by mistake. Still does. Anyhow, the sad bastard is dead and gone.
Posted by Wayne Allen Sallee at 10/24/2009 10:57:00 PM

I think I told you about the kid who ended up killing a mother of three here in Charlotte. She was from the west coast (Washington) and was only here because she had to attend a lecture (her bosses insisted). She was going out with some other attendees to eat after one of the lectures. As she and the others walked across the parking lot of the Hilton Hotel where they were staying, a station wagon pulled up. The door opened. A punk with a twelve gauge shotgun demanded money. The others froze, but the mother of three panicked, screamed, and ran. The punk opened up on her with buckshot. She died instantly, shot in the back.

There were six punks in the car as it peeled away, burning rubber. The cops knew one would open his trap. In fact, it only took a few hours. One of the kids was just riding along. Not a bad kid at all. He went to his aunt and spilled his guts. She called the cops and told them everything, including who pulled the trigger.

The cops knew this kid. Boy, did they. He was only 16, but had already committed some really violent crimes. Juvie. There was little they could do. But they KNEW he was going to kill some people. They were just waiting for the bad news.

So the local cops loaded for bear. They knew where he'd be. What they were hoping for was that he would resist. They had requisitioned the heaviest fire power in the station. They got to his place.

Jove was feeling good that day. The kid appeared out of the front door with the same shotgun he'd used to kill the mother whose three kids would never see or hear her again. He threw down.

The cops opened up.

They say the kid ended up getting hit something like thirty times. He was Swiss cheese.

That's the kind of story that leaves you a little sick to one's stomach. The thing that bothers me so much about these kinds of things is they don't kill the ones who hassled them.

You know, most people think that a little coldhearted teasing and harassment never hurt anybody, huh. But it does, and many killers are formerly passive people who have snapped at the limit of their bullying saturation point.

Did they ever find out what happened to the guy's gate?