What Can You See That I Can't, James Lipton? 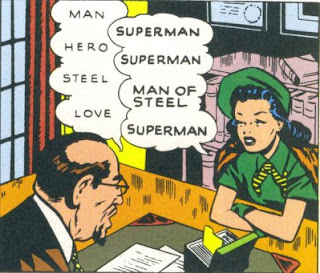 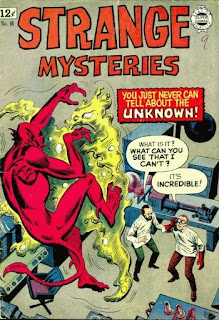 Well, OK. Its Lipton doing the talking to the other guy. I'm combining my comic tangent with my vision quest tangent--finding the Dread End tale--to move on to other things, like photos of the 16th Street Bridge.

A lot of people seem to look like James Lipton, both in comics and in real life. I love what some people say is the best single Lois Lane panel there is, and it made me recall that the same guy was on the cover of that other nutty comic. I had owned it as a kid, someone in Kentucky had let me have a bunch of books to shut me up or something, and over the years it was lost. (Seriously, I had this comic in 1966, and who the hell knows where any of my stuff was by 1970, even). I always remembered the cover, the mismatched colors to the one scientists outfit, the blob and the red guy battling near the ceiling, but I didn't know the publisher or the title. Years back, I'm at a comic convention and my brain makes me veer to a bargain box. I do not look in bargain boxes, I'm there to find a Golden Age BLUE BEETLE, and yet...the second book from the front was this very book I'm talking about. I bought it for a buck. I also have a fonder memory of it, I helped Ashley learn to read with the book. She even got the proper inflections right with the cover dialogue right on the second or third try. At least I can get away with a few things around here. Oh, and the cover scene. Never happens in the story. The lab tech that doesn't look like James Lipton was high on the joy juice. He could only see through walls. Of course, he could have been screwing with Lipton, too. I would. Regardless, its a pretty cool cover, you have to admit.
Posted by Wayne Allen Sallee at 3/30/2009 11:40:00 PM

Yeah, I like that cover. That Superman panel is pretty good as well. I've never seen it before I don't think.

It is a funny cover.

And James Lipton gives me the creeps for some reason, maybe it's his dopey Barbara Walters type questions. :-p

Ross Andru was reading Lovecraft when he drew that.

Those weird little "Super" comics were the last gasp of the once-powerful Quality Comics Group, who published such amazing shit as PLASTIC MAN and THE SPIRIT and BLACKHAWK, etc. They sold most of their content and characters to DC Comics, but had this inventory of crap that they tried issuing in odd little reprint books from time to time.

So fucking sad what happened to the comic book business. We were talking about that today at work. Back in the day, a kid who actually had a full dollar in his pocket could walk into the neighborhood drugstore and buy ten goddamned comic books. And there were comic books to fill every imaginable interest--police comics, crime comics, funny animal comics, real animal comics, western comics, superhero comics, science fiction comics, fantasy comics, war comics, romance comics, detective comics, ghost comics, monster comics, biography comics...Jove...you name it, there was at least one title for it.

That's a great cover. Would, of course, be better with a gorilla...

Is that Lois panel real??