The Title Used To Be Much...Angrier 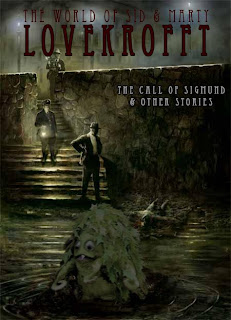 I came across this weird lampoon of Lovecraft and those spaced-out Krofft Brothers nightmares of the 70s, H.R.PUFNSTUF and SIGMUND & THE SEA MONSTER. I have one Lovecraftian tale of my own, something I had originally given a much more vile name to. It's a fun story, for those of you that have not read or heard the story yet.

Nice one. I'm trying to remember. I don't think I've ever written a Cthulhu type story.

Always fun being destroyed by you my friend. I feel like Steve Buscemi at the hands of the Cohen brothers.

Wow! I'd write more but there's this annoying noise in the back yard, almost as if something unspeakable and squishily squamous were oozing beneath the fence near the darkened alley. Give me a minute to open the door and se

Didn't you read this at one of the Twilight Tales gatherings at the Red Lion? Yes, this was one of Harry's favorites, too...
I remember the title was more..... explicit....but it's even funnier this way!