My Valentine Gift A Day Late 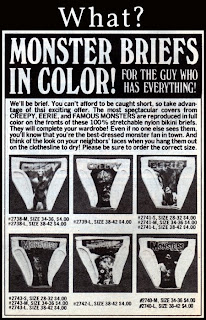 For that, I'd start wearing underwear again. Just imagine the shock and surprise as I pull off the Eyeball Testicle underwear to reveal the *real* thing!

I assume, of course, that you're wearing a pair now.

Oh great, no Monster under-roos for girls! See, all that cool comic and monster stuff was just for boys back then! :-p

The Captain Company, which was the retail arm of Warren Publishing, was notorious for ripping off its customers (the fans who bought the magazines). Not only did they overcharge for stuff, they often did not send the material at all. They'd just take the money and...well, just take the money.