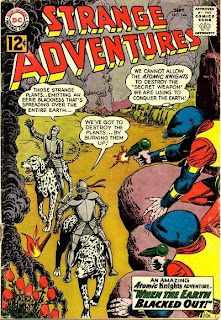 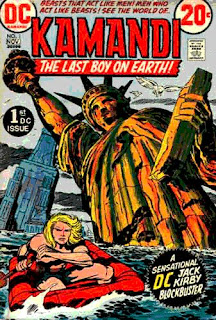 I loved the space comics DC put out in the 1960s, Gardner Fox wrote about a billion stories a month, even as he worked on The Flash and Green Lantern. He created The Atomic Knights, and I just loved how they rode around on giant Dalmatians, pretty much just exploring the country. It was established that a nuclear war had occurred in October of 1986, and, in some small ways, there are slim connections to Kamandi, the giant animals playing a big part. DC puts out these SHOWCASE books, all B&W reprints, 525 pages for $15.00. Much of Kirby's stuff has already been published in Omnibus form, and deservedly so, but there's an upcoming Showcase entitled TALES FROM THE GREAT DISASTER, and it will be fun. Remember when I said I'd settle for the Australian Kanga-Rats? Well, I think those guys are moles on the cover, but if I have to settle for that, that's okay by me.
Posted by Wayne Allen Sallee at 2/08/2009 12:01:00 AM

Hard to believe 1986 came and went without the promised nuclear holocaust and subsequent mole invasion.

Or maybe it did, and those brave gentlemen on the mutant dalmatians were able to keep it all a secret...

I love the Dalmations too. I've always been a complete sucker for post-apocolyptic stuff. There are so many possibilities. Plus, who doesn't love mutants.

"After a 2008 chock full of weirdness, DC Comics wants to get back to basics with more grounded stories... by putting front and center one of their biggest, most cosmic stories ever. Which stars zombies."

"The talk – or, more accurately, the refusal to talk – of all the DC panels was Geoff Johns's upcoming Blackest Night, where Lanterns of every color and persuasion will throw down in a universe-spanning brawl that may or may not feature every single dead character in DC history rising up as a Black Lantern, ready to eat brains and kick butt (my money's on the Earth-2 Superman and Abin Sur)."

Re today's FRANKENSTEIN email: though I used to catch up every year by reading my cousin's Marvel comics when we visited my dad's family in KY (at least until the year I went up to his room to find his comic books and found Playboys instead- to which I certainly did not object), I, too, was a DC man.

The Atomic Knights! When I was a kid they weren't my favorites. In fact, I never developed any affection for those stories until I was older.

As for the omnibus collections--those are cool. But no way to expose children to the wonderful comics we enjoyed in our early years. The cheap comic book that every kid could afford to buy is, alas, seemingly a thing of the past.