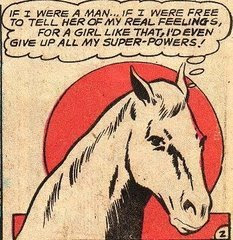 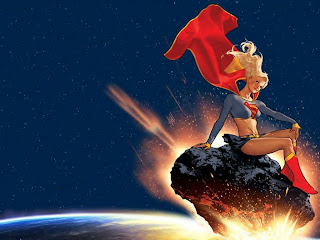 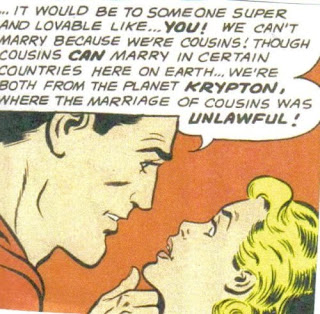 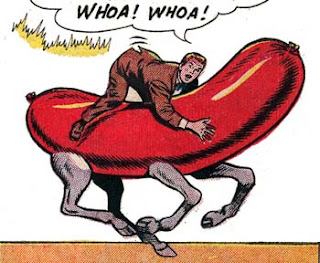 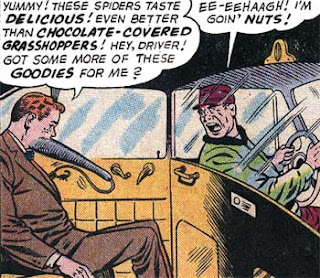 Well, OK, Jimmy Olsen's up to his crazy antics at the bottom. Dig the face on that cab driver, though. Earlier, I had been up north reading, warmish night, rained a bit, but its after 1 and I need to be up by 7. Plus, I should have some photos developed, hopefully a few from tonight's full moon reflected in the rain were a success. Crazier things have happened with me and my disposable cameras. I'd rather write a nice and slow rundown of events.

Instead, I'll finish my (sort of) comic posts with my personal favorite, Supergirl. She's my favorite because I like anything created in 1959, so that goes for Green Lantern, too. As you can see, though, 1959 was a goofy time in the era Mort Weisinger edited the Superman line. The horse at the top, that's Comet. He had a crush on Supergirl, while he was still a horse, until he was able to turn into a centaur whenever a comet flew past the Earth. I'm not certain how the transformation occurred, or why Kal-El is hitting on his cousin, but again, two words: Mort Weisinger. You worked for him, you could pull an idea out of your @$$ and he'd OK it. Ah, to have been in comics back then...
Posted by Wayne Allen Sallee at 2/09/2009 11:57:00 PM

I'm telling you Mort was a prophet! They always call them crazy!

Wayne -- I like the giddy-up hotdog. BTW, check out my LJ for a video of the dogs singing for their supper.

I only thought comic folks were crazy before. Now I have proof. Gathered right here on Wayne's blog.

Looks more to me like Supergirl's hitting on *her* cousin. Old stick-in-the-mud's the one putting her off...

The net's full of speculation about superhero sex lives, but there's a conundrum I consider more troubling than wondering if the Thing's thing looks like a thing... Purely medical interest, of course. It's okay, I am a doctor.
Would Kara (or any other enhanced creature) have super-sensitive genitalia? Or are they less responsive than ordinary humans'? I mean, you hit these people with a brick or pull a building down on their heads and it just tickles. If the pain receptors are impregnable, what about pleasure?