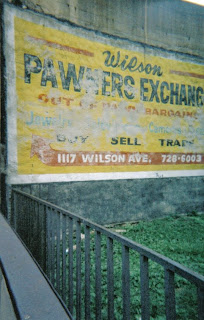 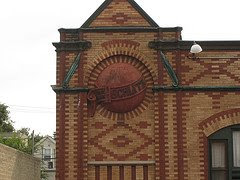 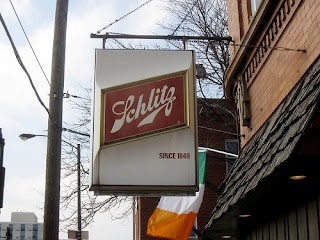 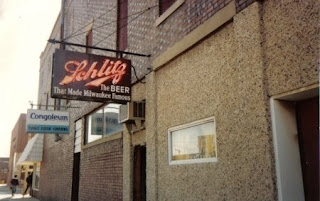 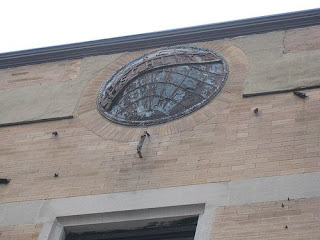 Yea, Charles, there must have been some hunters selling their dead 'uns here a hundred years ago. The building in front of it was torn down in the 60s, so Tallow was hidden for generations. I took some photos in Uptown a few years back, and the one for the pawnshop is right below the el tracks. I actually took the photo as a reference for a body bump, but, well, that's my job. A week later--honestly--I went back and there was a sign for some bank that no longer exists. I lucked out there.

I've decided to post these Schlitz signs. I never knew Chicago was so into Schlitz, at least years ago. On the sout' side, its Old Style everywhere, both Zimne Piwo and Cerveza Fria, even plain old Bottles and Cans. A few of you have seen my odd yet lovable Schlitz Congoleum sign from Streator, Illinois, and the one above that is from a cool jazz bar called Schuba's. This just came to mind, never in my life have I seen a Hamm's sign anywhere, not here, Streator, Shelbyville, nowhere.
Posted by Wayne Allen Sallee at 2/18/2009 11:32:00 PM

I'll always have a soft spot for Schlitz. It was my first love and comforted me many a night.

Heya Wayne,
The reason why Chicago was into Schlitz, as I understand it, was that Schlitz was into Chicago. I suppose you can verify this with other sources (since I am a Notable Unreliable Source) but Schlitz actually built these places in the heyday of Chicago corner taverns. Schlitz built the taverns and, of course, the taverns sold Schlitz beer. It would be like Coca-Cola building Coke stands all over the city to sell hot dogs (Chicago style, of course) exclusively serving Coke -- no Pepsi (cheeps, no fries). It must have been a pricey venture even in its time, but you've got to hand it to a brewery that would build its own taverns.

I was always a Grain Belt man, m'self, but right about now I'd sure love a cold Schlitz. Or Pabst, perhaps.

One thing about NZ, even the crappy cheap beers are like Sam Adams quality. Sometimes a guy just wants a brew that's a bit like making love in a canoe!

And the Hamms signs are being stockpiled in Minnesota. After the Great Beerpocalypse, barrels and barrels of Hamms will be rolled out from their secure underground bunkers and thirsty folks will need those old signs to guide them...

We have nothing like that here. We used to have an old building in town that, long ago, housed an old company that made and assembled elevators. The outside of the building had an enormous sign painted directly onto the brick: "PARK ELEVATOR COMPANY". Some guy bought it and put a music club inside it and called it "PARK ELEVATOR COMPANY". The music club eventually failed (they all do), and the building was (I think) torn down.