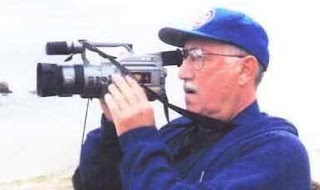 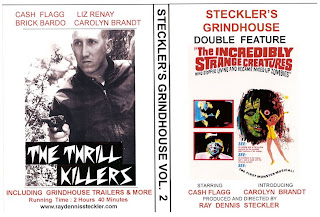 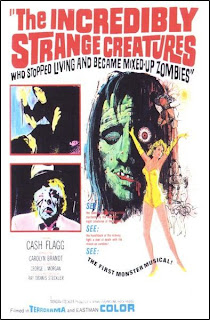 GW Ferguson passed on the news earlier this subzero evening. Most people know him as the producer of THE INCREDIBLY STRANGE CREATURES WHO STOPPED LIVING AND BECAME MIXED-UP ZOMBIES, which also happened to be a musical. I saw this film on CREATURE FEATURES at a time when they were saving all the Universal Monster runs for the summer months when the kids were off of school. Steckler acted in his own films as Cash Flagg, a good a name as any, I suppose. Years later, as I discovered others...like myself who watched such oddities, I found out about films like THE LEMON GROVE KIDS MEET THE MONSTERS, THE THRILL KILLERS, and RAT PFINK A BOO BOO, a riff on BATMAN & ROBIN but the name had to get bastardized thanks to DC Comics being the corporate dick it always has been as well as Big Daddy Roth (rightfully so, in this case)wanting the trademarked Rat Fink off the film's title. Steckler made low-budget films through the late 90s, and had just filmed a sequel (yea, how cool is that?!) to INCREDIBLY STRANGE.... 2009 now gives us this film as well as the remake of PLAN 9 FROM OUTER SPACE. Ray Steckler and Ed Wood, two guys who made crappy movies because all they really wanted to do was tell the stories no one else wanted to. I mean, c'mon, a zombie musical in 1964? The guy was a visionary.
Posted by Wayne Allen Sallee at 1/08/2009 11:29:00 PM

Sad to hear it. I think Rat Pfink a Boo Boo was on the Independent Film Channel recently.

One story I always heard was that Steckler's budget was so tight that the titles for "Rat Pfink and Boo Boo" came back with the "nd" in "and" accidentally left out. He couldn't afford to have it fixed. Thus, the movie appeared with the much cooler title of "Rat Pfink a Boo Boo".

But were any of them as classic as Zombie a Go go?

Oh gosh! Cash Flagg! Yes -- oh I remember well the INCREDIBLY STRANGE CREATURES. Ray Dennis Steckler was no Orson Welles, but then who is -- more like southern California's low-budget Fellini, and that, as you know, is no exaggeration. You're right -- he WAS a visionary. I remember Lester Bangs, the rock writer who did such brilliant stuff in the seventies, wrote a long, long and delirious essay on INCREDIBLY STRANGE CREATURES for Creem Magazine -- a rock journal, because he asserted that INCREDIBLY and rock and roll were born from the same DNA. I had already seen the film -- probably the same venue where you saw it, on TV. And at the time I knew about Steckler and his other films from Castle of Frankenstein magazine. They weren't easy to find but I always kept my eye out for Mr. Steckler's odd marriages of wit and the slightly sleazy. I never caught up with the Lemon Grove Kids movie, but I've been wanting to see that one for years.

Low budget southern California Fellini -- or a Curtis Harrington frenetically coming down from an acid trip.

Something about Rat Pfink -- when I first saw your American Dream character, I swear this is true, my first thought was, "If Ray Dennis Steckler grew up in Chicago instead of southern Cal ... "

My friend Mary Hoth, aka Sluggo Von Hoth on Facebook, has already said (after I shared with her the news of the death of Ron Asheton, guitarist for The Stooges) she thinks 2009 is going to be bad year -- a year of people "getting off the bus." The phrase comes from the remark someone made about Ken Kesey after he died: "Well, he's off the bus now."

It's already a cold, cold winter: Yma Sumac, Bettie Page, Forry Ackerman, even Ron Asheton (one of his post-Stooges bands was named "Destroy All Monsters") Chesbro, Donald Westlake, Mr. Fassl -- I know there are more names but my memory gives out. And now Ray Steckler. All of them off the bus. And who will be left when we get to the end of the line?

This is the kind of day you could shoot in black and white and no one would notice.

Sid: I need to really check out the IFC schedule more often. Though, when MONSTER A GO-GO was on, I was amazed it was TCM.

Hemlockman: I do recall reading about the missing N and D, but I didn'e see it on any site I checked last night. And, yes, it gave us a much cooler title.

Charles: Can't say that I ever heard of that one before yesterday.

The zombie musical is a terrible idea that just won't go away, as witness plans for Diamond Dead with Asia Argento: http://www.cracked.com/article_16256_near-misses-6-worst-movies-hollywood-almost-made.html