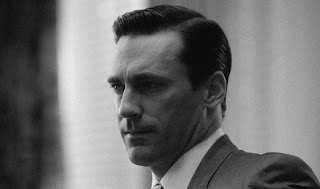 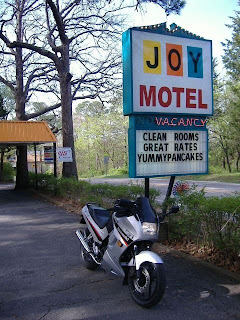 I signed up with Twitter back in August, figuring it would be a good discipline to write coherently in only 140 characters, and if someone were to check my list of followers & those I follow, they'd see wayyy more people in advertising than writers. This is thanks to Paul Isakson and, to a lesser extent, Sid Williams. Here's the deal. There's a show on AMC called MAD MEN, centered around the Madison Avenue advertising agency of Sterling-Cooper, circa 1962. Don Draper is the creative director on said show, and Paul decided to take on the role of Don Draper on Twitter. It was an experiment of his, he's in advertising up in Minneapolis, not with AMC. I saw Sid make a funny remark and I jumped in, apologizing, saying that Sid thought it was 2008 because he had been hit on the head. From that point on, I was in 1962, whenever I talked to "Don," always keeping it in the past. We never did send messages much, but it was neat trying to squish 1962 brand names out of my brain, like Oasis cigarettes. Paul eventually stopped the charade, wrote about it on his blog, but it was fun while it lasted, as I now have a lot of 1962 references for when my stories are set in the past of my Humboldt Park childhood.

I call what Paul tried a "thought experiment," a phrase used by physicists and mathematicians. I figure, why can't a writer of fiction have a thought experiment of his own? As I mentioned above, its all about discipline. I was talking to Capcom about LOST, and how I long ago thought the Numbers represented people (and this was before viewers learned of the Oceanic 6; there are six "cursed" numbers in a doomsday equation, for those who do not watch the show). People would ask me to explain why I thought a number could be a person, and I couldn't explain, its not like I was thinking outside the box, it was like thinking out loud. Brainstorming an idea for a story. A thought experiment. Sid has started up a series of podcasts and I had another idea I visualized in my head, to make YouTubes of someone reacting as a short story is heard. Think about it, a podcast is basically someone reading to no one. So why not do a short story that has a person reacting (albeit staged) to the bulemic zombie or the obsessive-compulsive ghosts? It may not even work well, but I can see it in my mind, and, as with everything these days, the Net is all about self-promotion. So at some point in the future you might be seeing a few WillySid/SillyWayne videos when you hit search on YouTube.

Back to Don Draper. I made a few friends in advertising on Twitter, from Gulnar Ozturk in Turkey to Horatio Salt in Toronto. Horatio and I started a riff where Salt & Sal would have 140 character vignettes whenever the mood struck us. Last month we combined our individual thought experiments and started Joy Motel. Its a stream of information (replacing consciousness) novel, with its own blog for people to follow, though it intrigues people to see a new entry pop up out of nowhere. Like overhearing three sentences of a conversation on the street. Joy Motel might be the novel a man was writing when he died, we don't know yet. Horatio and I are still processing the information. We seem to be having success, whereas I failed miserably when I tried to send a message to Gulnar in Turkish, as it made little sense to her.

Anyways, this is part Happy 2009 promotion for @JoyMotel, the link at the left, along with Horatio's and Paul's sites, and my general discussion of thought experiments. I'm curious if Bob or Charles have had similar brain flashes, where something bounces around your head like Harlan Ellison in a Philip K. Dick novel, yet you can't explain it until all of a sudden it makes perfect sense. I'm sure it works for all of us when concocting our stories, but I'm thinking the comparison is more along the likes of deja vu from what Charles calls 'iceberg memories.' Or is it just me who is crazy?
Posted by Wayne Allen Sallee at 1/01/2009 10:56:00 PM

Thought experiments, yes. Based on TV stuff, no.

I'm one of those rare folk who actually does NOT watch commercial television. Yes, I view the occasional documentary--but when folk start talking about popular TV shows, past and present, I'm at a loss. I know what LOST is. I know what HEROES is. But I have never watched one millisecond of either.

But, yes, thought experiments are cool. I once bought a weird little book written by a couple of guys who decided to make an ancient catapult. Using only tools and technology extant before the 1300s or so. It was an exercise in thinking--a thought experiment. It was a fun little book and quite a good source for such an experiment. I think I gave it to fantasy novelist Ian McDowell as a gift after I'd read it.

Wow, what great ideas! Thanks for writing this post and laying out the details for us.

I have always been fascinated by the process of how bits of creative inspiration (from what you see, hear, think, etc.) can gel into a full blown idea for a project. Up to now I only get to follow the creative processes in my own head, which is kinda boring overall, albeit exciting whenever I do come up with something useful. So, I'm really looking forward to peering into your heads and following all this, whichever way it goes. :-D

Hemlock, help me understand why some folks eschew viewing TV outright. To me it's just another media for viewing/learning like books. PBS and the BBC productions are worth watching alone. And the old Twilght Zone morality plays! Oy, I could go on! The junk is prominant, for sure. But there is a lot of creativity there too for the discerning viewer. :-) I may just be a very visual-media person, so that's why I enjoy TV so much.

BTW, nice post pix, especially Don in b/w. :-) I guess there's really a Joy Motel? FWIW, I can see many ways that people could be figured into an equation.

I'm off to check out Joy Motel. I figure my mind is definitely a thought experiment, and perhaps without needed controls.

Joy Motel is a brainstream, which is a cool word that describes the unedited flow of sparks traveling the neural net inside our lead character's head (Kindred is his name.)

Kindred has purchased a corrupt brainstream from the Terminal, which is causing him to timeslip.

As writers, Wayne and I are along for the ride, typing out the neuro-transmissions we're receiving daily from an unknown and potentially malevolent source. We intend to hang on until something explodes.

No, you're not the only one who's crazy. I'm right in there with you lately, myself. Sorry for my recent absence--been busy with offline life. Best of 2009 to you & yours, Wayne. Peace!
Best of luck with Joy Motel, btw!

Oh well, something must have happened to my post yesterday. Anyway, heheh, "iceberg memories", I just got the meaning of that as I reread the article. :-B I like it!

And then there's this:

Novels written on cellphones are dominating the Japanese book market