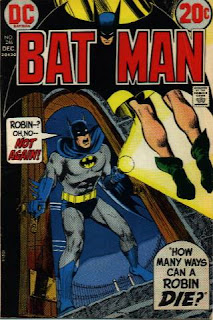 I get maybe three spams a day, I never open them, but I'm often delighted by the subject headings. Case in point, earlier today. Blue Green Boner Pills. Better than the Nigerian lottery any day. I have no real image to post for my spam, so I'll instead go with Batman yet AGAIN finding Robin going too far with his auto-eroticism..
Posted by Wayne Allen Sallee at 1/23/2009 11:27:00 PM

Oy, thanks for only posting that related image. X-o

BTW, in case anyone who reads J.Wood on Powell's Books doesn't know yet, he just announced that he has MS, if you're a regular reader of his and want to send your prayers/thoughts his way. His humorous take on this new experience for him, along with his equating it to events on ABC's Lost, are similar to our much-loved Frankenstein1959 host's interpretation of the world of physical setbacks:

"Some readers may recall that at the end of last [Lost] season, I mentioned in passing that I was having some vision trouble...A few months ago I was diagnosed with multiple sclerosis...However, I began all the meds and therapy three weeks ago, and things are getting under control. I've been inside an MRI machine and forgot to take off a belt with an iron buckle; it was like the failsafe in the Swan station, and the machine yanked my belt and my body up off the table. I get to wear a pirate patch sometimes, like Mikhail. If you recall the first episode of the second season, "Man of Science, Man of Faith," you'll remember when Desmond inoculates himself with an injection gun; I get to to zap myself with a modern version of that each day."

That Batman/Robin cover is just too much. Robin, old chum, you've gone too far this time.