Over Dere By Under The Viduck 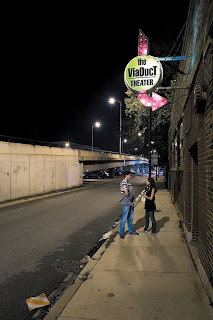 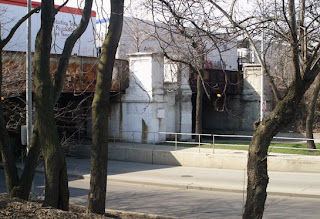 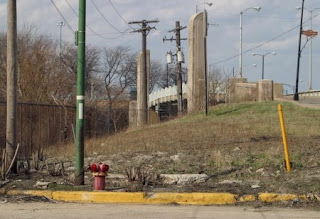 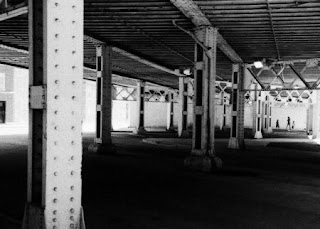 Trying to catch up on the posts I had wanted to deal with, this one following the time I mentioned viaducts flooding after Hurricane Ike in, what, August? And, Bob, I swear I'll write about the time I fell into the hole while scavenging the ruins of Miami Bowl soon, I swear. People in Chicago talk funny, particularly when offering
directions. Over dere covers just about any distance, and in the case of, say, there being two people/places with the same name, you might hear, "No, not Jimmy from over dere, but the Jimmy over dere by the viduck." Viaduct, of course, but still a baffling set of words. So here are some of our infamous viaducts. One not pictured is infamous to south siders, the big, yellow one at Damen. For decades, that was the barrier between black and white south side. It was one long tunnel, as well. Closer to me, there are the viaducts that run between Central Park and Lawndale, with the Grand Trunk RR running on tracks above the cross streets. There are always odd little bars nearby, like Players on 59th and Traxx right near the 8th District cop house on 63rd. That couple up top have no clue. That viaduct in the background runs beneath the Morse Avenue el tracks in Uptown. Kind of a crappy place to be even in broad daylight, worse after those lights go off when the bars close. The theater is on a street where, once you go away from those el tracks, things get better. You're not walking streets that look like the backdrop of a Starsky & Hutch chase scene. Years (I mean, years) ago, that place was called Roy's, and it was a dive. I'd stand on the el platform and hear the jukebox and see cigarette smoke coming from the cracks in the windows. It was one of those places you that had a pool table you couldn't see until you walked into it. One of the few places where I wouldn't try and take a photo for later reference. But it was a great bar to disappear in. My days of drink are over, my days of being able to afford drink gone, but Roy's was a place that I quite honestly believe produced its fair share of John Doe murder victims over the years. I still miss the place, though. What can I say? I'm nostalgic.
Posted by Wayne Allen Sallee at 11/19/2008 11:19:00 PM

The viaduct theater is on Western and Belmont. Not Morse. There aren't el tracks anywhere near there. I know because I live over by dere.

One thing that totally amazes me about our species are the feats of engineering. Even when I'm hiking a trail cut into the mountains by FDR's Civilian Conservation Corps, I have to stop and marvel at the skill and forethought that went into something as simple as a trail. They're not so bloody simple.

I never could stand going into smoky places. As in: cigarette smoke. The stuff makes me want to puke. I loathe it and can't tolerate being around it. I will only tolerate it in the company of one person--my old pal Budd Root who is sadly addicted to nicotine. For him only will I hang around the stuff.

One horrifying memory of cigarette smoke will never leave me. I was at a horror convention with Mark Rainey. He suggested that we attend a party being given in one of the rooms. So we went. As soon as we opened the door, smoke poured out. Smoke so thick that not only could I barely see, I couldn't really breathe. Looking toward the far end of the room, I could see the writer sponsoring this party standing there with his wife. On the bed, gasping for breath, was their infant son. This guy was supposed to a big children's rights supporter. Right. I took one more look at that helpless infant and the stinking clouds of cigarette smoke and said, "I can't stomach this, Mark. I'm outta here."

I still miss my beloved "Red Door bar." Got into quite a bit of trouble in there.

You don't see stuff like that so much in Christchurch, don'tcha know...

I miss my Irish pub that I used to hang out in during the 90s. Ugh, don't know how I could stand the smoke, by the time I left I had no voice. An old Irish guy actually lived in an apartment over the bar, I don't even want to think how it smelled up there with all the smoke wafting upward to his place. :-p

You are so right about that guy and his baby Hemlock!