I Chose This Road 22 Years Ago 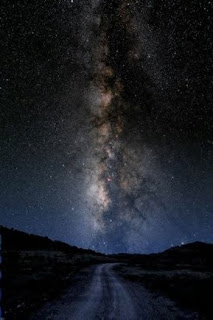 You know what they say. Once a pilgrim...

Wise choice. :-) Sweet image! Is that from APOD?

I saw the Milky Way this summer (on Folly Beach in SC) for the first time in almost 20 years, I think. Too much light in Poughkeepsie for that. :-(

Such an amazing feeling when you see it, I could stare at it for hours.

These feet are made for walking. No crossroads, but maybe a refueling station somewhere along the way.

I've been wanting to post that photo for a few months, its from TWAN, The World At Night, a great site. I then realized that I didn't have any words to go with it and I really wasn't going to creep people out with another poem by e.e.cummings.

When I was a teenager living on my dad's 120 acres in the mountains of north Georgia, I used to hike up to the highest point on our land (a little peak called Pine Mountain) and look up at the night sky. I could always see the Milky Way on a clear night. Always.

I haven't been back to that specific point since my family forced the sale of that land, but I have been near there in recent years, and the light pollution from the ever-growing cancer we know as Atlanta has obliterated the Milky Way.

It's a good road, of course (even though it's a clearly altered image.)
BTW, we've survived Gustav. I've got videos on my blog if you're interested.

Hemlockman: Chicago was the same way, as you could suspicion.

Lana: Yes, its not a true photo, but by now you must know the kind of roads I walk down...

At least you didn't see this in the night sky.

Or maybe you did. That would explain many things.