Breath As Hard As Kerosene 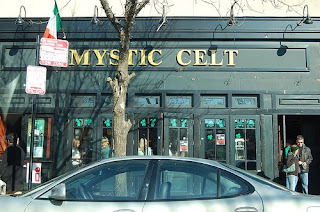 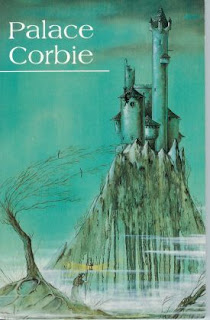 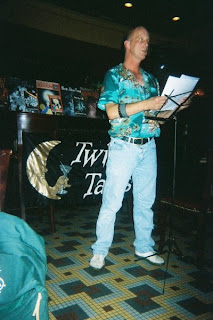 I skipped over blog entry titles from "The Weight" because, frankly, I really don't even understand what the damn song is about, and now I have Willie Nelson & Merle Haggard singing about Pancho & Lefty (nicknames for my testicles, a little known fact). It rained most of the day and my old roommate from the 80s, Gary Krejca, picked me up and we zoomed over to the open mike for Twilight Tales. As I was waiting for him, I took care of a few things. Cleared out my spam folder. Subj: Security Threat From The World. Hmnnn, curious, an email from Solaris perhaps? Pass. Subj: "Goodbye To Yellow Teeth!? Sounds like a movie starring Jack Palance. Pass. Then it was on the road, and I might have gotten a few good pics of choppy Lake Michigan for a future entry on the song "Lake Shore Drive." Open mikes are always fun because there's a huge mix of short pieces, works in progress are my favorites. One of the younger women hugged me for my birthday and then promptly read a story about a woman who evidently has sex about a dozen times a night but keeps putting her Supergirl underoos back on because she likes getting them pulled off again. I drank an entire carafe of water and I don't even know how to pronounce carafe most of the time. When it was my turn to read, I had to explain about an incident--never mind why--involving my working at the comic shop in the mid 90s, changing from slacks to jeans in the back room, my leg getting caught and me falling back hard enough to have the neck of a Mountain Dew bottle at least kind of, partly, I dunno, maybe the bottle was just curious, ram itself into my @$$. I still tell people if I go to prison one day, just bring it on, Aryan Nation, Nubian Nation or Kree-Skrull Warriors, I don't care. It got a good laugh as I intended because I still have a hard time reading, there is no mike stand and I also blame myself for not printing out pages that I could flip over with some semblance of ease. I'm actually thinking of duct-taping the mike upside down on my face next time around. I read a story, "Never Come Lopez," a riff on Algren's NEVER COME MORNING (the book I was reading when I was demolished by the car in 1989, a Pakistani clothing store owner found it later and returned it to the nurses' station at Holy Cross, several miles away. He couldn't read my name, but he asked where the ambulance took me from someone, after closing his store, returned the book.) Another of the Things I'll Always Remember events. The story ran in PALACE CORBIE, a fine book/magazine published by Wayne Edwards throughout the 1990s. I love the photo of the Mystic Celt here as it is very sharp, the way buildings and shadows look in the late fall and early winter. The werewolves will be at my door soon enough.
Posted by Wayne Allen Sallee at 9/08/2008 11:27:00 PM

I couldn't read in public. No way. Far too bashful.

You know what would really by funny? If the one on the right was named Lefty.

My wife works in a hospital where she's a surgical tech. One night, a couple of years ago, this guy STAGGERS in quite literally writhing in pain. Seems he was suffering from something of which I'd never heard before that moment, and hope never to hear of again. TWISTED TESTICLE SYNDROME. They had to make an incision in his abdomen and go in and untwist them.

While she was trying to explain this malady to me and my then-teenaged son, we were howling with laughter as she labored to explain how such things happen by way of hand motions. Andy and I could NOT stop laughing. Finally, we started riffing on the whole TWISTED TESTICLE term. Between gulps of breath, I stated that it sounded like a heavy metal rock band name.

Then Andy, veteran of many a rock concert, suddenly goes into a high pitched rock 'n' roll voice and says, "WHOA! HEY, CLEVELAND! IT'S GREAT TO BE HERE!"

And it took me about fifteen minutes to stop laughing.

Dude, check the Wikipedia article on "The Weight":
http://en.wikipedia.org/wiki/The_Weight

Having never had a bottle up my ass, I myself am not quite ready for prison. Mountain dew no less.

That was extremely nice of the fellow to return your book. What a dude.

You may be older than you've ever been, but you're younger today than you'll ever be!


As of this afternoon...

*I hereby declare the Intarweb a "Kum-Bah-Yah"-free zone.

** Or "it ain't no Burgess Shale"
or "baby whale" or Cthulhu's tail; whatever floats your testicles.

Townes Van Zandt, the guy who wrote Pancho and Lefty, also wrote a couple of my other favorites: Colorado Girl and Dublin Blues.

Too much Hemlock! I wonder if that was Twisted Sister's first choice of name. :o)

How To Cope When You're Feeling Old.