Why Clowns Scare Me 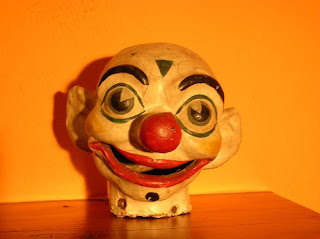 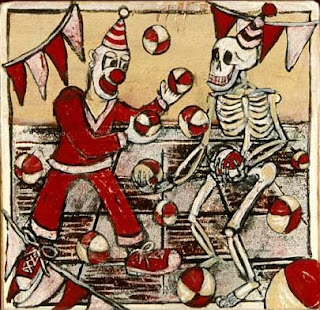 The last few nights, I've skirted around the Bobo doll experiment, and it seems as if, in yet another example of collective subconsciousness of, well, the insane, G. W. was posting on similar childhood fears after discovering a website called KinderTrauma. All kinds of crazy stuff on there, but nothing beats real life, folks. I am afraid of clowns, and I have been since I was a kid. I can accept them as a productive part of society, I certainly can tell you that clowns will not really eat your brains like a zombie will, and I'd probably even let a clown touch me by accident in a crowded gimp dungeon, well, if I ever went into one of those places. Now Chicago has its clown history. Bozo started here, he was on television continuously for almost fifty years. John Wayne Gacy was Pogo the Clown. But my trauma goes back to when I was a kid, and it goes back to an event NO ONE ELSE CAN REMEMBER! I had recurring dreams of the event long into my twenties, much as I have a certain cityscape of sorts that inhabit my nights, from el stops with different names, strange intersections where real ones do exist, and even this odd pink building far north in what I perceive to be the city, its like a parallel Chicago that I dream about. And so perhaps this clown event happened on Earth-14. I KNOW this happened, I know the smells, the colors, the movements around me. And yet, according to my folks, and as I've said before, I grew up poor so I believe them, we never went to the circus, any kind of circus. Yet, I recall with crystal clarity a clown in a burnt sienna and white suit, three big floppy buttons and pirate-clown sleeves get blasted out of a cannon to land in a net not far away. Only it didn't happen that way. The clown shot into the air and exploded and then was gone. Just smoke. I always dream of the smell of that particular smoke. The crowd reacts horribly, as do the performers. There is a terrible explosion about halfway between the cannon and the net, the smoke is dirt brown and then grey and then white and the clown is gone. And EVERYBODY who works for the circus knew something went horribly wrong. I remember faces in the crowd, men and women still were dressing formally for the event, suits and dresses, kids with pink and green balloons more than the regular red and blue. I stopped having the dream in its entirety in the mid 1980s, but it might have just been bumped back by the newer, crazier dreams. So now I've put in down and judge me how you will. I was never at a circus but I saw a clown explode and a woman with a red hat next to me shrieked.
Posted by Wayne Allen Sallee at 8/31/2008 09:48:00 PM

Sounds like a really vivid nightmare to me. The kind you wake up from as a kid KNOWING that it really happened.

With me, as a child, it wasn't clowns that scared the High Holy Shit out of me. It was dolls.

I'll tell you about it sometime.

Once, in Barcelona, I saw two clowns make out. It was... vivid.

Wow, that is on the scary side. Christine has a fear of clowns too but no recurring nightmares or anything.

I've never liked clowns either, but I loved Mr. Rogers.

Hey, gang of three. I never once thought about writing about that childhood event until I skimmed through that KinderTrauma site. The details are slipping away, more like a painting's colors fading than anything. I've never been afraid of dolls, but one day I want to uncover Mattel's conspiracy in the disappearance of Barbie's BFF from the 60s, Malibu P.J.(The one with the ponytail).

Hemlockman: are you afraid of action figures, as well? I'm getting one of Kurt Russell as Stuntman Mike (never mind the groans about the film) for my birthday.

Charles will likely comment after Gustav leaves the area, but he sent me a small figure that he says is from somewhere else, but I think it looks like a six-inch high Sean Connery whose right leg is permanently locked in a Hitler kick position because of the post office. I just have him scaling my bookshelf from a pb to a trade and it works OK.

Dream, nightmare, reality, or not, that's a pretty horrifying image to carry around in one's brain.

At the very least I find clowns intrinsically creepy, which seems to be a fairly common reaction-- Lon Chaney Sr.'s "clown at midnight," Spielberg's clown doll in Poltergeist, Bart's bed in The Simpson's, Freaks...

And Killer Klowns From Outer Space which, though billed as a horror/comedy, I prefer to think of as a documentary. It explains so damn much.

Wow, that's really weird. If your family never went to a circus per se, could it have been a show at one of those traveling carnivals that set up in fields and mall parking lots? (and Catholic church lots)

I still love the original Bozo. I was never afraid of clowns until I was an adult and realized that behind the funny clown face could lurk a very evil person. :-o

Ooh yeah, "Freaks"! But that only made me afraid of women covered with chicken feathers. :o)

GW, Lon Chaney Sr. was haunting in most everything, the stilted movements in the silent films most disturbing.

Cap, I've thought about everything from carnivals to magic shows, but this event was much, much bigger. And in a tent, not some outdor summer thing.

It happened and the government is covering it up just like they did Roswell.

No doubt it's a coverup. :-) You must make it a scene in one of your stories, if you haven't already. The truth must be told!

More on the Conet Project.

Saw this tonight; thought of you: