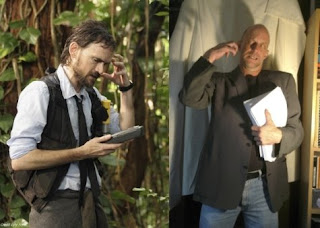 Daniel Faraday, mathematical genius. Short term memory from overexposure to Kerr Metric time travel. And to the right, me. We both have instruments that we need to use, but whereas Faraday is making a strong time paradox argument, I am simply staring at my palsied hand. You think my look there is bad? Think about when its time for the old man to shave. Picture the scene of Robert DeNiro's character brushing his teeth in AWAKENINGS. (The photo above is one of dozens Greg Loudon took in preparation for FIENDS BY TORCHLIGHT. His wife Darcie just gave birth to their third child on Wednesday. Gives me random moments of happiness). Summer winds down. I cannot type without clenching a toothpick between my teeth. Later I'll take my border collie out and while he takes a piss standing up because he grew up in a box at Pet Luv and doesn't know any better, I'll be searching the stars for blessed redemption....your chattel, Wayne
Posted by Wayne Allen Sallee at 8/23/2008 09:37:00 PM

I've heard of a Faraday cage. Used to use them all the time in grad school.

When I was 9 or 10, I was alarmed that my beagle puppy didn't hike his leg, so I followed him around a field lifting his leg until he got the hang of it. Funny thing is, that dog was left-handed the rest of his life.
In Arab lands, it's customary in some tribes for the male to squat while urinating. Could your border collie be part of a sleeper cell? This nearly cost the explorer Richard Francis Burton his life once, as he was traveling disguised as an Arab (Mirza Abdullah, the Father of Moustachios), forgot the custom, and peed standing up. This was not the first nor the last time a man was threatened with murder for grasping the obvious.

I did not know of a Faraday cage, but that's cool info, Charles. That's one of the great things about "Lost," there are hidden factoids everywhere.

Charles & Sid: I've read up on Faraday cages in the years prior to LOST because of some time travel story in Superman. You might recall they had a 1950s character named King Faraday which was a riff on the TV show KING FOR A DAY. I looked them up again once this guy showed up on LOST (and Jeremy Davies portrays the character superbly) showed up. One of the smallest Faraday cages in layman's terms would be one that circles the magnetic band on a credit card or in my case my handicapped bus pass or Borders card.

At Mike and Bob: here's the really strange part. I knew right away what the problem was in the way he spent the first three months of his life, but I went about correcting things the wrong way. Yes, I tried what Mike suggested. Almost. My way was to stand on one leg myself, only I wasn't squatting on all fours. I can still imagine my three year old puppy looking at me thinking the right way to piss was to stand on one foot. I'd even be like, hey, psst!, watch this trick, pal. I gave up on it after a few tries because he really was deadset on going about his life his way, but I never once thought to try lifting HIS leg up. Mind you, Mitch is the first male dog I've had since 1966. Yea, good excuse from the guy standing in his back yard like Pluto or Goofy.

Very interesting photo, especialy in context with the finished product on the side here.

I had to make a Farady cup (it's not an athletic support for scientists :-) at work for our lab's homemade electron microscope once. Those are the fun-but-scare moments at work that you live for, when you actually learn something fascinating.

Good wishes and prayers for your friends' new baby. :-D

Capcom: the blood-stained clown costume is a recurring theme in my narratives. Sometimes I'm selling copies of CAT FANCY door to door, other times walking down the street on New Year's Eve screaming ATTICA! ATTICA!. Ah, well. Russell plays a trumpet. Still kinda cool. I think Fred Ward was at his best in TREMORS.

What was that damned contraption that William S. Burroughs built? And would spend time in, just meditating while certain "forces" were marshaled about him. Jack Kerouac mentions it in ON THE ROAD when they go down to visit Burroughs on his cotton/marijuana farm.

No way the Dynamo's gonna bust me on that one...