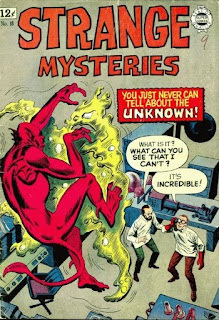 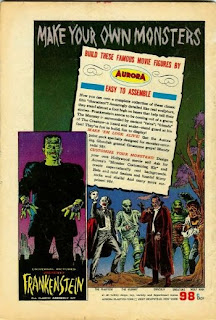 Through a different discussion with different people in what might be Earth-14, the alternate Earth I seem to visit most often after eating a pint of vanilla ice cream and watching Japanese Bazuke, I had mentioned this specific comic posted. It was one of my vision quests. Most of us have them. Items we have to acquire because of some anchor to the past. In this case, it was Strange Adventures#16, a comic I read in my Auntie Emma's living room in Shelbyville KY back in the mid 60s. And it was the first time I felt ripped off-even though I hadn't even purchased the book and it wasn't mine-because the scene portrayed on the cover NEVER HAPPENED. The two scientists and the googles were integral to the story, but those battling monsters in the foreground were nowhere to be seen. I always remembered that cover for that reason (so maybe, in retrospect, the scam worked), and several years ago, at a mini-convention where you could buy comics in booths next to aging Playboy bunnies, Lou Ferrigno, Adam West, and has-been writers like me, I found a copy of the book in a box some guy had brought in from Grand Haven, Michigan. Since I had talked this cover up to my other inter-dimensional friends on a different vibrational plane, I thought I might just post the whole history of the book's being an anchor to my past. And just because I can never post just one image, here's the back cover of almost every DC comic in the mid 60s, advertising the best models every created by man...Wayne
Posted by Wayne Allen Sallee at 6/22/2008 09:59:00 PM

I've almost completed just such a quest: The Adventures of Buckaroo Banzai! I've got a bid in on an auction...

Yeah, I recall that comic. I also recall that I never read it, because when I opened it (probably around age eight) I saw that it was composed of crappy reprints. This same company apparently did several such comics over the course of a couple of years. Either a failed attempt to make some quick bucks in the comics biz by reprinting older books they figured were in the public domain, or maybe an earnest try at creating a new company (I seriously doubt the latter).

I, too, was a consumer of all things Aurora, and had many of them as a kid. Yes, for sure, the finest model kits ever created by Man. I buy all of the Polar Lights recreations that I can lay my hands on.

I know I've been pissed off myself a time or two when the cover was blatantly false to what was inside, or especially when the cover blurb was totally wrong.

Monsters on the cover, and not in the story, is just not right.