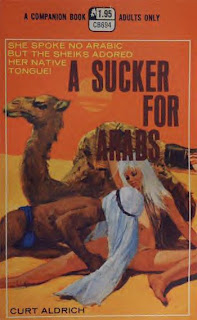 It seems as if the Middle Eastern book went over well with those who emailed me. I did forget to post this cover, with such a clever play on words. I don't really have anything to post as follow-up, but for this strange little piece by someone named Daniel when I Googled Burbank, Illinois a few nights ago. Yea, one would think I'd be doing something productive, like writing sonnets about sweet, sweet octopus love. But I wasn't in the mood. And here you go, the nameless story, and I am by all means not mocking the prose, simply giving it new life...Wayne PS As strange as some of my blog entries about the south suburbs have been, I don't think anything like the following could have escaped my attention. Unless it happened while I, ah, Jonny Algiers was at Whiskey A Go-Go or downstate investigating the earthquake...

It's finals time here so I'm seeing a lot of zombie students shambling around. They keep chanting, "Grades, Grades."

I love zombie stories. They're all the same!