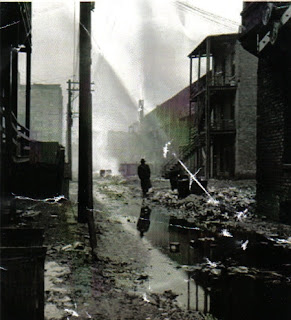 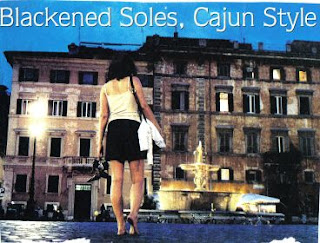 Windows lit and unlit. The skin of buildings. I've had the above ad, which was actually on the flip side of a more important article fifteen years. I just love the layout, part of the fun is guessing where the woman is headed, which room, or is it just a short cut across the parking lot of dirt and tar. Anyways. It was one of the unseasonably cool nights as I walked down that winding road and waited for the 383. A breeze from the south, stars and planes dotting the sky. Wishing I had someone to share nights like this with, instead of relying on the voices in my head creating dialogues and situations where the narrator dies YET AGAIN in one of my stories. I'd be pleasantly pleased if at least one of the voices behind my eyelids started talking in a female voice, I'd settle for Phyllis Diller, even. Just so I could say something and get a laugh in return. Instead, I walk the walk. And I'm not alone, there are more like us....Wayne
Posted by Wayne Allen Sallee at 11/19/2007 09:41:00 PM

This is what Harlan Ellison called "the bitter-sweet" of "Angry Candy": "You are not alone." Maybe so many characters die in your stories because you're meant artistically to be a kind of memento mori, "reminder of death", those skulls philosophers kept on their desks to remind them not to waste time. I've got one in my classroom, a Spencer's Gifts. skull bought on sale with a felt jester's hat, meant to be Yorick, Hamlet's friend. I suppose Hamlet and Yorick would be the most famous memento mori pairing (artists liked to paint young men with skulls), and of course Hamlet does the talking, doesn't listen to Yorick, and so "plays Hamlet", frittering away and not making his move until it's too late, hence the tragedy. The Romans used to have a guy stand behind the generals in their victory parades to whisper in their ear, "Remember, Prince, you too are mortal." A lot of my own work (3 out of 5 novels) unintentionally ends up witnessing to mass murder, making me a ghost at the banquet, so we can hang.

That "there are more like us" makes me think of Ray Bradbury's "The Crowd." I like that top picture a lot.

I know how you feel my friend.
We all life sometimes:)
HUGZ

Sleepy morning, my brain's full of sludge. But I really, really liked this post!

And yeah, both those pictures...