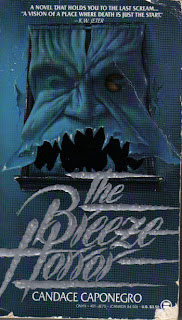 Mike Fountain reminded me that The Occult Bookstore used to be in The Flatiron Building, as well as House of Monsters. Myopic Books is still across the street in the midst of regentrified Hell. The latter store has a section that brings back memories of the late 80s, when we had Horror sections instead of Dark Fantasy at all the major bookstores that have closed here since Borders opened. Zebra and Onyx were putting out 15 titles a month. Years ago, I started one of my little quests for the above book, I recalled the cover distinctly, even the author's name. With advent of Google, that proved no help past the info I already knew, that was the author's only novel. (Remind you of anyone?) I found this about five years ago online (yes it takes me awhile...) but I had 58 hours of work last week and thought I'd at least bring in a couple of books to flip between, I also had Charles Beaumont's THE HOWLING MAN. But get this, the book isn't some spooky ghost story. Its what amounts to a zombie novel. Preceding Skipp & Spector's Books of The Dead. Google the book now and you'll find several references to the book as being a cult classic, nothing I saw posted years back, with bloggers referencing the remake of DAWN OF THE DEAD and 28 DAYS LATER. Well, the book is just an ok read, probably good by 1988 standards. But, whereas it was the title that always made me recall the book even existed, to see the contents as something so vastly different, people stuck on an island off the NJ coast with toxic rain reanimating corpses...its too bad no one thought to do more with this, maybe give the author confidence to write another book. As Charles noted last week, the same kind of thing still happens with the Hollywood pitch. Maybe it is time to wrote THE COLOUR OUT OF MySPACE."...Wayne
Posted by Wayne Allen Sallee at 11/12/2007 09:46:00 AM

The Colour Out of MySpace, The Dunwich Dial-Up Horror, The Things in the Firewalls...

Y'ever wonder how many MySpace friends Cthulu would have?

Well, if the author is still living, he could always go to Leisure and see if they'd want it for their line of zombie novels. (Well, it seems they have a line of zombie novels, since so many of their titles are about reanimated corpses eating the flesh of the living.) With the supreme popularity of zombie fiction, it should be easy to see it reprinted in a new volume.

Yes, the superstores have killt off all competition (save one another). I miss the indie bookshops that I used to encounter in most urban areas. All gone. All fled.

Love the "colour out of my space." lol. This book, "The Breeze Horror" sounds like something I'd like to read. Will have to search for it. I've never heard of it before