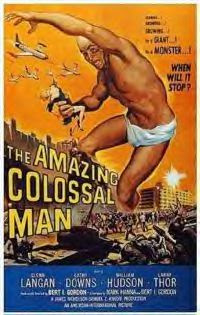 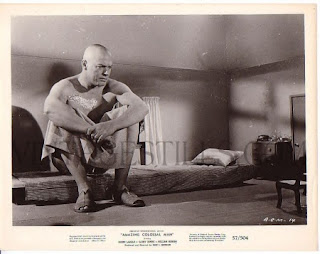 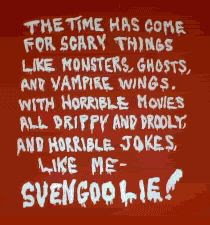 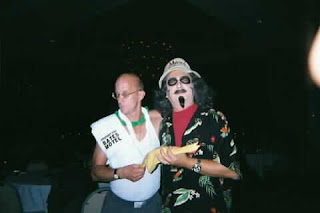 I'm still listening to that cassette and there's a great trailer from THE AMAZING COLOSSAL MAN, as stated above. I just wished I had thought of posting Col. Glen Manning (after being exposed to a plutonium blast) at the same time I put David Hasselhoff out there. The best part of the film is that, when actor Glenn Langen grows and starts wearing that diaper, everybody normal-size sound like the Pillsbury Doughboy to him. He terrorizes Las Vegas, falls into Hoover Dam after being shot, then appears in the sequel as The Amazing Colossal BEAST, with pretty much half his giant-size face a grinning skull. The man-diaper stayed on during the fateful fall.
Back to last night: Screaming Yellow Theater was on WFLD Channel 12 (now Fox)on Friday nights, starting in 1970, and hosted by Jerry G. Bishop, a radio DJ. Dressed as Svengoolie, he was a hippie vampire with long green hair and red and white striped bell bottoms, and a red sweatshirt and peace medallion. He'd sing the goofy lyrics above and did a bunch of gag jokes, car commercials, and then all of Chicago would see, what seemed like every other week, a Vincent Price movie. In the 80s, Rick Koz took over as Son of Sven, eventually dropping the Son part with Bishop's well wishes as the latter retired to Florida. Koz is one of the coolest, most patient fellows who has hosted or guested at maybe six conventions I've been to this decade. But we had two night of greatness, if only one horror host, as Creature Features aired on WGN Channel 9 Saturday nights at 10:30. The theme was, as Richard Chwedyk emailed me, Mancini's "Experiment in Terror," which was also used in a Sherlock Holmes film. The best thing about CF was that every single film they showed was a Universal Monsters film. The Old Guard themselves, Dracula, The Monster and His Mate, poor Larry Talbot, with Dr. Jekyll & Mr. Hyde tossed in along with Abbott & Costello...fun times, a long, long time ago.
Posted by Wayne Allen Sallee at 10/30/2007 10:03:00 PM

I haven't had time to watch a single horror movie this last week, which is hurting my head. Love this time of year, but I even missed "It's the great pumpkin, Charlie Brown."

When I was a kid I always hated films like COLOSSAL MAN and its ilk. They were like KING KONG and BEAST FROM 20,000 FATHOMS, but made by bastards too cheap to spend money of stop-motion effects.

One movie that I liked when I was a kid, but which many people I know loathe, as THE GIANT CLAW. Cheap, hideous special effects, an arguable goofy monster, but it scared Holy Roman Hell out of me when I was a chap.

The Amazing Colossal Man for some reason was much better in 1965 on afternoon TV than it seems today. Ditto "Them." I think the ants looked more realistic back then.

Ah, those old Universals. They did monsters right!