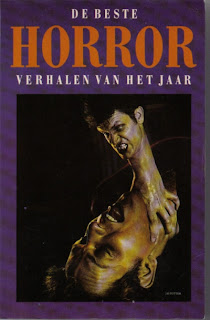 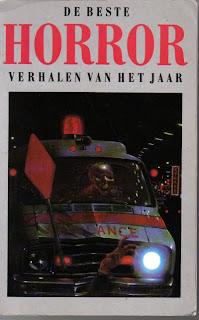 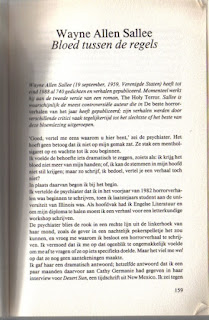 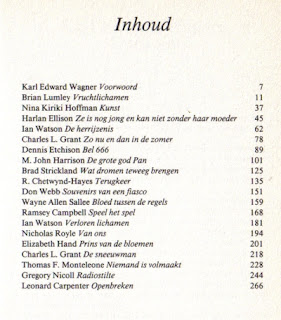 Kees Buis is one cool guy. I came across Dutch editions of Year's Best Horror while Googling images one night, and after waiting a few days to contact Kees, not certain if he was a collector or bookseller, I emailed him about the two books above and he found them in his inventory. I received them in the mail on Thursday, it was kind of neat getting mail from The Netherlands. I put together a box of signed books for Kees to mail during the coming week. I have other books I am in, French, German, and quite oddly, Danish. It is strange seeing familiar words and names. These books, the table of contents in particular, make me melancholy, as they are editions from very early in my career, 1987 and 1988. The stories were "Bleeding Between The Lines" and "The Touch." I see names of people recently dead, several gone for over a decade. Thinking about how young I was when these stories came out almost twenty years ago. Anyone who can pick up a copy of ANY edition of Year's Best Horror (published in the US by DAW) can expect to find some of the finest writing of the late twentieth century. And time goes on, keyboards clacking away, those of us who still can and still have stories to tell...Wayne
Posted by Wayne Allen Sallee at 10/14/2007 07:48:00 PM

That's pretty cool. As of yet I don't think I have any stories in translation, unless the Dark Terrors and Dark Voices 4 books were translated. Since they haven't even been sold in the US I doubt it.

I have a complete set of YBH, including the years before Wagner took over. Great stuff, especially the Wagner years. He had a great eye for exceptional stories. I recall how no-talent bastards would whine that he never chose their work and a few even falsely claimed he only took stories from his friends. That was one reason I came to loathe almost every one in the horror writing community. What bunch of whining self-important assholes.

For some reason, the Germans went for my first graphic novel more than readers in other countries. No translations, just they were the ones buying the English version.

I used to joke that I was the David Hasselhoff of NZ comics...