Letting The Chilly Girl Have The Cab 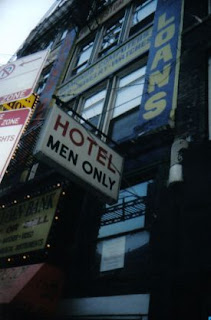 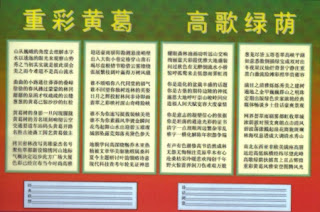 This post might seem rushed because my right side is spasming, a cold rain has made the temperatures drop quite a bit. I was at the Red Lion tonight, Roger brought up some hardcover copies of FIENDS BY TORCHLIGHT for me, and I made it from work in time for the 2nd half of open mike. Martel--who will be interviewing me for DARK SCRIBE this weekend--wrote me this note and PSd it that I could post it on my blog. Its a nice note and I think I'll post in one day, but let it hang around for awhile. Many of the readings were quite long and Roger and I ended up taking the Brown Line back downtown at 11:30. We met a toothless wonder named Claude who told us about the Ewing Hotel (pictured) and how if we gave him money it would be for McDonalds and not Giordano's deep dish pizza, a somewhat clever line coming from a guy asking for spare change. I got off at Adams & Wabash, crossing overhead for the Orange Line and waited as Roger got off at Madison. I had told him to look for me and saw a flash of either a camera or a gun with a silencer. Either way, I hustled down the stairs and took the el to Midway Airport, the end of the line. By now it was almost 1 AM, and the airport was filled primarily with people who were sleeping it off until their connecting flight four or five hours from now. I went outside for whatever cab I might hope to find and let a young woman take the one cab in line. Another was pulling up further down the terminal, but I had a leather jacket on and she was shivering in a low-cut summery blouse. It looked like her luggage thingie with the wheels on it weighed more than she did. Well, the next cab was the cab of karma. A tiny Chinese man was behind the wheel, I recalled thinking how I never had a Chinaman for a cabbie ever in my life, and by the end of the ride, having talked about a few things like Monday's rain and that I was a writer, he showed me poetry of his own that he had written and explained one about various interpretations of the banyan tree...the tree itself, romance in the shadows, reading in the grass, many things. He offered me a copy, as he had several in a booklet beside him, otherwise I would have declined. I walked down the street towards my house--its always simpler for the cabbies to drop me off on 87th and make a U-turn--and smelled the poem and the note with his name in English and in Chinese. He arrived here from Chunking seven years ago. The pages smelled like the cab, a mustyy smell like that of an attic, or of our own Chinatown with its many small, enclosed shops. That's all there really is to my posting, though I wonder what kind of driver the chilly girl with the big suitcase had. Meeting a guy like Xinyao (X-zin-gao)makes me almost not think of 9/11. I am reading a book where a guy mentions someone so devoid of emotion that the numbers nine-eleven don't even make him think of making an emergency phone call. OK, now I'm done. Tomorrow I will write about how my last dog was stabbed by suburban polak thugs three days after my 40th birthday....Wayne
Posted by Wayne Allen Sallee at 9/11/2007 12:40:00 AM

My nephew went and hit the museums and had a great time, and he told me that I needed to go at least to the Field Museum to see Sue, but I never have.

On that first visit, I drove in with Mark Rainey. My first sight in the early morning rush hour with the interstate a packed stream of chromium molasses, was of the horrific towers of Cabrini Green on my right. Some Third World Nightmare. I recall that some of the windows in the towers were shattered outward and the facade around them were blackened from some moderate flames that had carbonized the spaces around the windows. I wondered what would happen to us should my van break down at that point. Nothing good. I stopped sweating as it very slowly receded into the distance behind us.

I've since been told that Cabrini Green is no more. Gone like the WTC towers. The wind.

Had it truly been the Karma cab you would have found a winning lottery ticket in the seat with no identification or possibility of identifying the person who purchased it. But the Chinese poet sounds worth meeting.

I missed out on the Monday Night Mystery Tour-- open house night at the high school. A lot of smiling and nodding and making rash promises to parents that I won't open their children's minds too far, and not as much fun as literature-and-stout fueled explorations of the midnight town. Next time you meet the Chinese cabbie, ask if he knows the great Li Bo's "Waking Up Drunk by Moonlight":
I awake in the night,
And find the room turned to silver--
Could there have been a snow so soon?
It's just the moon,
Coming through the window.
Lying back down,
I think suddenly of home.