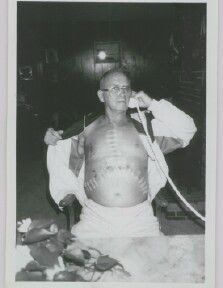 Even though I am not getting many comments on the *sigh* continued Elvis posts overall, I have yet to run out of twists and turns. This thread was not started because of the CD I received in the mail, its because next Thursday is Death Day. I may not post every day, but some things need to be put out into cyberspace, if only for those bored enough to do the One Blog Over thing to have their minds blown away by my All Things Elvis mind. Many mourn the recent passing of Weekly World News, but my favorite was always The Sun, which gave us headlines like "Elvis Lamp Sings Burning Love" and the one I've posted here. A curiosity: John Wayne his ownself--well, the ghost of his ownself--pops up here, too, and, the day he died of cancer, well, it was one of the nights I was working with the Elvis band. Lightning Burgers stood just across the street from Graceland. One who has never been there might assume that Elvis's gated mansion was on some cul-de-sac in some Willy Wonka area of Memphis, but it was a fairly simple house--never mind the interior color schemes--on land that was no bigger than some of the homes with horse stables down in Shelbyville. And the fact that the burger joint was across the street even when Elvis was alive and didn't suddenly start selling King Burgers, well, that's like Col. Saunders (CEO of KFC) and his wife running their restaurant a few blocks away from where my Uncle Jr. and Auntie Emma lived before the move to Finchville. That's Jr. up top, showing off staples after having a tumor removed, I figure I really don't see another segue coming along which would allow me to post this 1990 photo. Can't say I don't try hard to make these posts come full circle...Wayne
Posted by Wayne Allen Sallee at 8/11/2007 07:42:00 PM

"Unlce Junior"? You're not kidding! The first thing that popped into my head when I saw the photo was how much he looks like Dominic Chianese who, of course, portrayed Uncle Junior in THE SOPRANOS.

I've never been to Graceland. I'm not that big an Elvis fan. Is Lightning Burgers still there? One thing that I used to like to do when I traveled a great deal was to eat in local burger joints that weren't part of a national chain. One of my favorites was Biff Burger in Phenix City Alabama. Don't know if they're still there, but I wouldn't be surprised if they were. Also had a kickass burger at a local chain in Philly, but I've forgotten the name of the restaurants. It was kind of retro and I encountered several there when I was stranded in Philly for a week waiting for a part for the deisel van we were driving.

You crazy cyborg warriors, with your surgical modifications for life on Mars. "Tumor removed", yeah, right.

That's a helluva staple pattern. Looks like a tribal tattoo. I was watching the Perseid Meteor shower last night and I think saw them spell Elvis across the velvet black. I'm pretty sure. Yeah. Must be.

I'm not a huge Elvis fan, either, but I must relate an experience I had a couple of years ago...

My fiance & I had flown to Orlando to visit my bro's family around Xmas. One evening we went out to a local bar w/him. Within a short period of time, the party atmosphere had died, most of the patrons had left & it was getting quiet enough that we could hear one another talk. The next thing we knew, what I refer to as "a limo of Elvii" pulled up & the bar was full of Elvis impersonators in full costume, pulling people up to dance & singing Xmas songs. The party was back in full swing & we were all laughing our asses off. The costumes were creative & individual, including one guy who had adapted his to express his love of the Boston Bruins. I think that was one of the most surreal experiences I've ever had, & I certainly will never forget it. What a hoot.