Katrina Away From Home 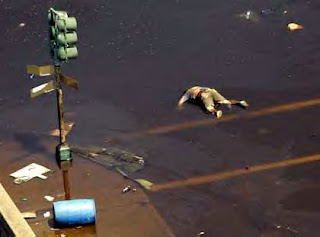 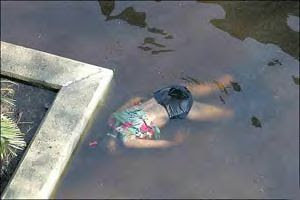 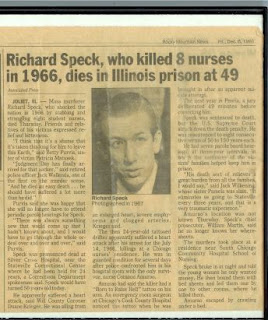 Some things you don't forget, images that become emblematic of a certain time. 9/11 easily tops the list, but I left downtown with the rest of the evacuees knowing I'd be home soon. I was in Shelbyville, Kentucky when Katrina made landfall two years ago today. I was at my Auntie Dorothy's, her son Danny is the guy who took the photos of me on the business card you see on the sidebar. Now, I know that house so well I can maneuver in the dark, but its still surreal watching a different television, seeing different views from outside kitchen windows. Tuning out Geraldo Rivera describing the flooding as a portion of "Dante's Inferno." The dick that he is. The one other time anything of import (at least to me and all Chicagoans) was when I was in Arvada, a suburb of Denver in the spring of 1992. I was at the Little Bookshop of Horrors, Tomi Lewis (who sadly died from breast cancer a few years later), is here posing with my first "book dump," my name spelled Wan-ye by mistake, just as Ashley did when she was younger. Ed Bryant showed me a copy of the Rocky Mountain News. Richard Speck was dead of a heart attack, having outlived his victims by a quarter of a century. After Gacy, Speck was the city's biggest cock-knocker. He was the guy that made us lock our doors and not sleep on the back porch on hot nights. The strangest thing in that headline is seeing "Illinois prison," as if I was in a place I might never go back to. I felt detached for the rest of what should have been a momentous weekend for me, as Roadkill Press (run by Doug & Tomi Lewis) had also just published FOR YOU, THE LIVING. I felt desensitized with Katrina, because I knew more about New Orleans from James Lee Burke novels and two visits for conventions too long ago to admit to. Yet, there was the strangeness, the couch not being mine, my border collie not there to pet. I took Greyhound home a few days later and the rain from Katrina followed Interstate 65 all the way to Crown Point, Indiana. I still mourn The Big Easy....Wayne
Posted by Wayne Allen Sallee at 8/29/2007 09:03:00 PM

Katrina was the biggest symptom that this country has fallen into a second or third tier category of nations. Only the worst of nations allows one of its largest cities to be so decimated and then to remain so shattered years after the event.

We're on a relentless downhill slide in which the elite rape the national treasure. Say goodbye as we eat coal.

I'm curious to see this new cop drama that's coming out called K'ville. See how they deal with things. Horrible pictures btw, and just a scratch on the surface.

I, too, was away from home as the Katrina disaster unfolded--I was visiting my mom in Virginia. How well I remember fearing for the city as the storm approached, breathing a sigh of relief as it seemed to pass with not much more than a glance, and then watching in horror as hell was unleashed on the City that Care Forgot, until then. Frustration, helplessness, and, finally, impotent rage.

I like to think that people haven't forgotten, but, sadly, it appears that the prevailing attitude over this anniversary has been "why are people still living there?"

We should never forget the governments criminal negligence of New Orleans, nor should we forget the corruption that has earmarked "recovery" efforts. Katrina alone should be grounds for impeachment. What the hell have we become?