Shells Of Easter In The City 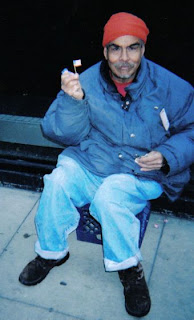 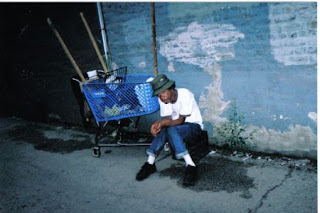 Easter. The eggs get broken. Shells discarded. I'm still angry about my last post and how much I want to eviscerate the bastard involved. He will end up being a stand-up guy at 26th and Cal(ifornia), site of Cook County Jail. Wasn't like he killed a kid. Nope. Cripples and homeless are fair game. Years ago, a guy living in a box on Lower Wacker Drive was killed by some hotshot shooting a crossbow; the guy was eventually caught after bragging about it. The crime is still the only "killed by an arrow" homicide in Chicago's sundried history of squalor and vileness. Maurice Kindness--he tells me with his Touerette's stutter that I could not pronounce his true name--has sold flags for years, since before the First Gulf War, his pleas or perhaps simple words barely audible on a windy day. Frank, the guy in the next photo, lives in the alley near the Red Lion Pub, at Fullerton and Lincoln, a lifetime and a lifeline away from downtown. Whenever I am going to go to the TwilightTales readings on Monday nights, I'll offer Frank a fiver and drink a coffee instead of a beer to start out. I am usually pissed off at myself in the simple fact that thirty-five steps will bring me into a conversation with Joe Heinen the Owner, the coffee reawakening synapses, my good deed already submerging. On Easter, I find myself thinking of "Flagman" and Frank more than I do my own family.
Posted by Wayne Allen Sallee at 4/08/2007 12:20:00 AM

You're a good man, Wayne.

Not too many years ago, several police officers in a nearby town were prosecuted for stalking and beating homeless people.

I used to deliver mail in a hideously poor and crime-ridden neigborhood. One day, when I was off and another carrier was doing the route, he was walking through the area where the clotheslines were strung, only to see a cop beating the shit out of a homeless guy who bedded down nearby and who we would often see. The cop stared hard at Scott, and Scott turned around and went the other way. The cop proceeded with the beating. We didn't see the homeless guy no more.

It's a hard life out there.

I think you think of them more than your family, because they need all the help they can get. And no one really helps...its hard!!!

It's been a long time since I've seen a homeless person (it's not much of a New Zealand problem), but your post brought it all back to me.

My last visit back to my birth country, I was struck by the homeless, the hungry, the mentally ill and the lost souls turned out on the streets. It seems like my former countrymen pay a terrible price in human pain to save a few dollars on social programs.

You're a good guy, Wayne.

You have a good heart. What some people lack in material goods, they make up in being a genuine human being.

This reminds me of how much I have. Even after Katrina rendered us homeless for a bit, we went to my family and they took us in, fed us, gave us money. Without the family there seems no safety net. But there should be.

Charles forgot to mention, too, that even when Katrina forced us from our home, we still made a point to give to the homeless that we saw on the streets of Austin.

What kind of country is this that (among dozens of similar examples,) people (often arrogant criminals,) who play a GAME (pro football,) are paid millions of dollars while people in need die in the street? Things like this make me ashamed to be American.