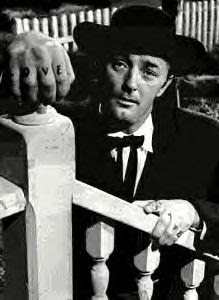 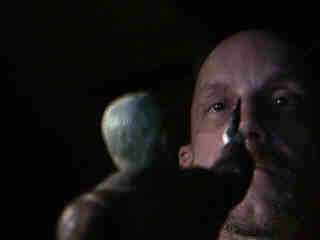 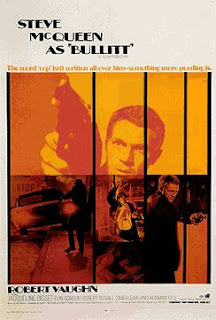 Bob and Lana have commented on my Steve McQueen action figure. I think Sid had awhile ago, and I probably answered him. Actually, its Lt. Frank Bullitt, one of the characters McQueen is best known for, and I purchased him at a place called Suncoast Video in Ford City Mall, where everything always seems to be marked down. They have the best selection of action figures, most of which I buy for my nieces, Disney tie-ins or Jack Skellington and Sally from NIGHTMARE BEFORE CHRISTMAS. I had Marv from SIN CITY once until the dog thought he was a chew toy, and I still have Hartigan, the Bruce Willis character, only he is missing a hand, something you really don't want to be checking dog crap for. I bought Frank not just for his cool outfit, the blue turtleneck under the leather jacket, but because his gun is always point at me, forcing me to write. That's the plan, at least. So, Bob and Lana, anybody else curious, go online and look up McFarlane Toys, he is putting out the cooleest stuff for people that are Bob's, Sid's, and my own age (though you young'uns like etain and steve malley might need to be hitting wikipedia about now). If only I can see a line of Robert Mitchum figures, Rev. Harry Powell from NIGHT OF THE HUNTER, Max Cady from CAPE FEAR, Jim Garry in BLOOD ON THE MOON (possibly the only crime noir western ever made), I could go on and on. "Would you like me to tell you the little story about the right hand/left hand?" Oh, and a Richard Kimble figure would be great, as well. (Oh, and I'm sporting a Jesse Ventura hairstyle the next few days, for those curious).
Posted by Wayne Allen Sallee at 3/26/2007 10:59:00 PM

I would definetely consider a Max Cady action figure. What did you think of De Niro as Cady in the remake?

Jove, Mitchum was great in NIGHT OF THE HUNTER, wasn't he? Pure, dripping evil. The scene when he loses the grip on that boat and the children escape and he's left to scream his hatred at the heavens. Chilling.

Best car chase in the history of cinema was the one in BULLITT. By the twelve gods! Only a couple of other car chases come anywhere near that level of perfection, and none reach it. A damned perfect film.

McFarlane Toys does do some good stuff. I should have figured it was a McFarlane toy. Have you ever noticed that the owner of that company and the character played by Henry Daniell in THE BODY SNATCHER have the same name: Todd(y) McFarlane? [IMG]http://i59.photobucket.com/albums/g295/jamesrobertsmith/toddy.jpg[/IMG]
I love the way Karloff/Graves utters the name in the film.

Remind me someday to tell you of a phone conversation between McFarlane and a well-known comics creator pal of mine.

yes this is true, I have no idea what your on about...whahahahaha;)

don't let my unnatural longevity fool you. I go back to a time when police chase were on horseback, movies were silent and an ankle rarely revealed...

The picture of McQueen menacing you w/his teeny gun is priceless! It looks like a guy finally confronting the evil villain who got him w/his shrink ray! *ROFL*
I'll have to check out that webpage--thanks for sharing the info!
Similarly, I was inspired by "Tales of Plush Chtulhu" to buy myself one. He guards my jewelry box.