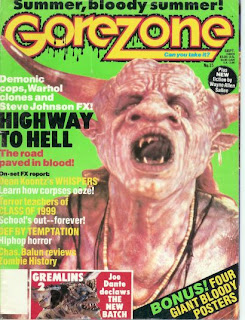 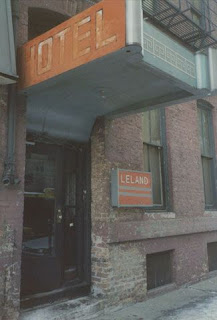 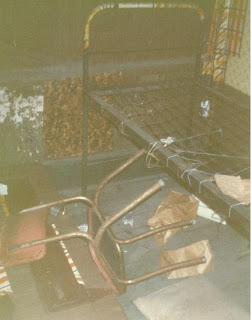 Many people commented on my post involving the men pacing the steam vents last Saturday, marking their territory. Charles Gramlich mentioned something that also happened to me, and I turned it into a story back in the days when I wasn't writing very good stories. Again I mention sucking with hyperlinks, so you can go to Razored Zen and read Charles' newer entries. Check my links at the left sidebar, below my horrid self-promotion. Back in the early 1980s, when I barely had money for bus fare, I was approached by a guy near the old Hotel Leland on Wabash, with exterior and interior shots provided. He was bearded, fairly lucid, and wanted to sell me pages of drawings and random thoughts from a stack of sheets in his hand. I still remember the stack, it was like order receipts on one of the pointed things in a low class restaurant. I explained that I could barely get home, the irony of the green and red building behind me not lost, and I promised him next time I would have a few extra dollars. But I have never seen him again, at a time when I would see the homeless often enough to know them by name, Jerome with his crippled leg pulled up under him like a broken puppet, Dave the guy with the Elvis sideburns, and Mike in the wheelchair, who became the model for Mike Surfer in my novel THE HOLY TERROR. But I never saw the bearded man with the drawings again, even though I was at the bus stop almost every day. Did he get a job? Did he take a bus to Portland? I ended up writing a story called "Face Value," which in my own ham-fisted way of writing in those first five years or so, was a story about my quest to find the man, culminating in following him into an alley, after spotting him after months of looking. Turns out the reason I wasn't seeing him was that the bearded face from real life was a mask, one of many skinned faces he had on a wall in an old factory, my face likely to be the next. It appeared in Gorezone, an offshoot of Fangoria, and marked the first time that my name appeared on a cover of a magazine. This was 1990. The man and his drawings that were always out of my grasp had stayed in my head for almost six years. Maybe he had moved south to bother Charles or found his way via steamer to Johannesburg, where at least the weather is warmer all year round, and eventually he will run into Etain and she will write a story about him, as well. Sometimes it is those with nothing that allow us the six degrees of separation.

You've never seen the homeless in droves until you go to San Diego. They're everywhere. It's the weather. If I were homeless, I'd want to be in San Diego, too. It never rains. It never freezes. I saw almost as many homeless that time in Philly, but the bums in San Diego were definitely much happier.

Your work remains fine and strong when you avoid the supernatural. The comings and goings of the mentally twisted are your domain, and one which you describe effectively and with great power.

There's quite enough horror in the mundane without looking to the impossible for inspiration.

I used to work with the homeless. I remember going in a van to hand out blankets, hygiene kits, and food baskets to street people. Some job.

I think the idea of the bearded man is a great story, which works well as a metaphor too. Good stuff here, Wayne. Made me think.

Robert, it amazes me that so many of the homeless stay in the bitter north. Perhaps it is familiarity with their surroundings.
Stewart, glad that one made you think, I'm honored. You are a fine writer, as are you, Robert. It is Robert, and not James, right?

You can call me Bob, Wayne.

I will have too look for him then, I cant wait to read some of your published work soon;)

Passing strange. They had a fairly big homeless population in Austin when I was there, and New Orleans has it's share, although things have so completely turned around since Katrina. Hard to know who is homeless and who not down here these days.

For a long time, the homeless could congregate in little box cities on Lower Wacker Drive, until Daley wanted everything cleaned up because of new condos being built off of Upper Wacker Drive. Back in the 80s, two kids killed a homeless guy with an arrow, the only death of its kind in recorded Chicago history.