The Cult of Sternberg 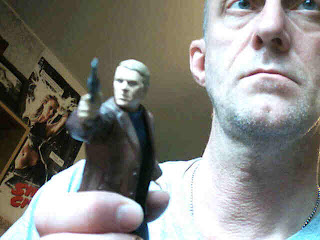 My last post received more comments than the one about back in the days when I was working with the Elvis band. Of course, Stewart is very decent and even took a bullet for me back when Donald Rumsfeld was masquerading as the Super-Skrull, but I believe that he has become a puppet master. No, not like Donald Sutherland. A REAL puppet master. Just months ago, there might be one comment on his blog; the other day, I went to comment and found that 46 people had already commented before me! The only possible way that this man is able to write seemingly nonstop and yet still comment to every single post made to him has to be this: Stewart has broken through the fifth wall and the multiverse has spilled from his very loins. The Stewart from the Kree-Skrull War may not be the same one as the infommercial Stewart who sells abdominizers and hunting knives. Until I can be certain of this, I shall remain alert with my ally Steve McQueen, who the "good" Stewart miniaturized, thus faking the actor's death, and presented to me after our battle with Luthor and Brainiac. Yours in paranoia, Wayne

Did you not know that Stewart Sternberg is the patron saint of bloggers? Have you purchased your Stewart medallion yet? Or the Sternberg lucky icon? It says "Blog Saint" in big gold letters. I'm selling these fairly cheap but they're going fast so put in your order today.

Well, at least you have Steve McQueen to keep watch for you.

That Stewart is a wiley one.

Steve McQueen was never my true target. Had things gone as planned, I would have taken out Andy Griffith, stopped him before the production of "Matlock", which continues to play every day everywhere somewhere.

And as for Braniac and Luthor? Amateurs. I was raised by Stan Lee. Make mine marvel

Wow, maybe there is a way to exploit Stewart's powers to merchandizing end. Who else should we have him shrink?

marvel comics, pff. you were history after the kree-skrull war, sir. charles, good luck with the medallions, maybe you can sell them on qvc. sgt seems to think you are a coyote, stewart. god help me if you are my totem animal.